Pictured at far right is the sculpture LOUD!, by Greensboro artist Kevin Vanek. It is one of seven sculptures installed along App State's Arts Corridor in August 2022. Click on the image for a full view. Photo by Kyla Willoughby

The Arts Corridor is one of several major construction projects underway at Appalachian State University to enhance the App State Experience.

The project supports the strategic plan of App State and the university’s goals and metrics associated with the University of North Carolina System’s strategic plan. It will benefit students, athletics and the community.

The campus Arts Corridor will unite the two halves of App State’s campus, as referenced in the Master Plan 2025 (page 41), while connecting the arts, transportation and university events.

This project builds on more than three decades of outdoor sculpture programming at the university and strongly supports the efforts by the Town of Boone and surrounding communities to feature outdoor artwork in public spaces. It plays an important role in positioning both campus and community as a vibrant and dynamic arts and cultural destination attracting visitors to campus and engaging them in the multifaceted life of the university.

The first portion of the Arts Corridor, Blue Ridge Way, was completed in time for the Aug. 31, 2019, football game. It connects the Stadium Parking Deck adjacent to Frank and Belk residence halls to Wey Hall, which houses the Department of Art, and the Schaefer Center for the Performing Arts — App State’s state-of-the-art, 1,660-seat venue that is home to a multitude of campus and community events, as well as visiting artists from across the region, nation and world.

The rest of the Arts Corridor will more visibly link the Schaefer Center, Wey Hall and the Hayes School of Music’s Broyhill Music Center — all located to the south of Rivers Street — with the university’s other key arts facilities north of Rivers Street: Chapell Wilson Hall, which houses the Department of Theatre and Dance; Valborg Theatre; and the Turchin Center for the Visual Arts, featuring six galleries with changing exhibitions of contemporary art works by national and international artists, as well as regional artists.

The corridor will support the university’s teaching mission by serving as an outdoor classroom for students of all ages, as well as the public, and enhancing learning opportunities through the visual arts.

Visit the Turchin Center website to learn more about the Arts Corridor and its featured artworks.

One of seven sculptures installed along App State’s Arts Corridor in August 2022. Titled Will the Circle be Unbroken, this sculpture by artist Beau Lyday, of Valdese, North Carolina, consists of two wood benches connected by overhead circles that embrace the benches and form what the artist describes as a “moon gate.” Photo by Lynn Rees-Jones

This sculpture, called Double Wedge, is one of seven sculptures installed along App State’s Arts Corridor in August 2022. Created by artist Carl Billingsley, of Greensboro, North Carolina, the painted steel structure comprises simple geometric shapes, with two halves that are bolstered by a supportive connection piece. The sculpture is symbolic of the need to strike a balance in our cultural relationships, Billingsley shared. Photo by Mary Anne Redding

One of seven sculptures installed along App State’s Arts Corridor in August 2022. This piece — titled Sounds of the Elements and made of stainless steel, bronze and aluminum — is part of a series of sculptures that reflect the elements earth, water, fire and air on the micro to macro level. Its creator is artist Hanna Jubran, of Grimesland. Photo by Mary Anne Redding

Pictured is Pegasus Landing — one of seven sculptures installed along App State’s Arts Corridor in August 2022. This winged horse, made of tubular steel, is the creation of Jessica Bradsher, of Greenville. Photo by Mary Anne Redding

The sculpture Balancing at New Heights, by artist Jonathan Pellitteri, of Charlotte, is one of seven installed along App State’s Arts Corridor in August 2022. This piece features two tapered concrete staircases with empty steel chairs on the top treads. The chairs face each other, emphasizing the need for dialogue among those who are on opposing paths, according to Pellitteri. Photo by Lynn Rees-Jones

LOUD! — a steel and cast-iron sculpture by Kevin Vanek, of wGreensboro — is one of seven sculptures installed along App State’s Arts Corridor in August 2022. According to Vanek, this work represents a literal mouthpiece for unheard or marginalized voices. Photo by Mary Anne Redding

Mike Roig’s Chrysalis is one of seven sculptures installed along App State’s Arts Corridor in August 2022. The artwork’s main section consists of stainless steel and is topped by a winged female figure made of cast iron who is emerging from a chrysalis that protects and embraces her. Photo by Lynn Rees-Jones 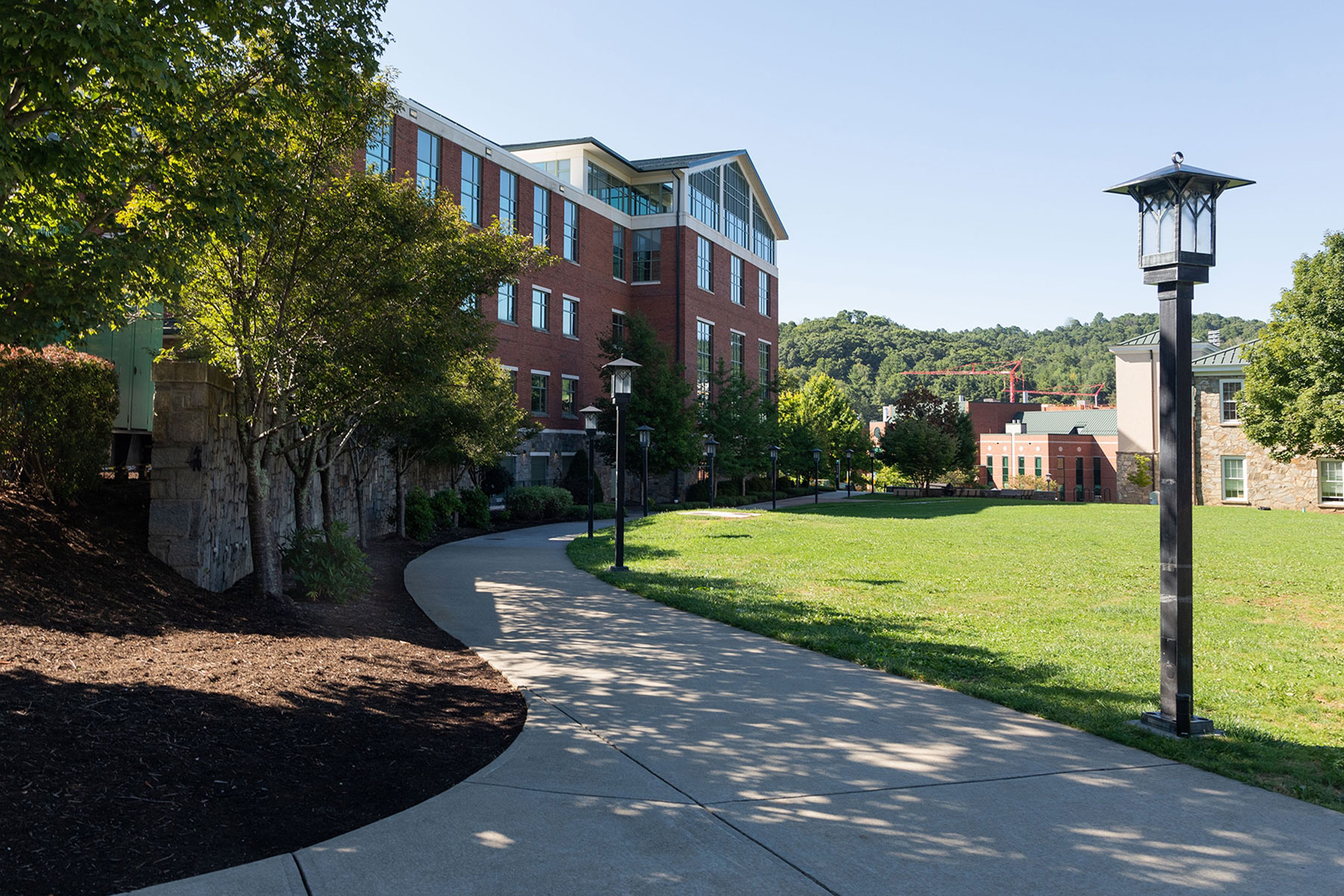 This pictured area on Appalachian State University’s campus — adjacent the Turchin Center for the Visual Arts, Valborg Theatre and Belk Library and Information Commons — will showcase outdoor works of sculpture, once the remaining portion of the Arts Corridor is complete. Photo by Chase Reynolds 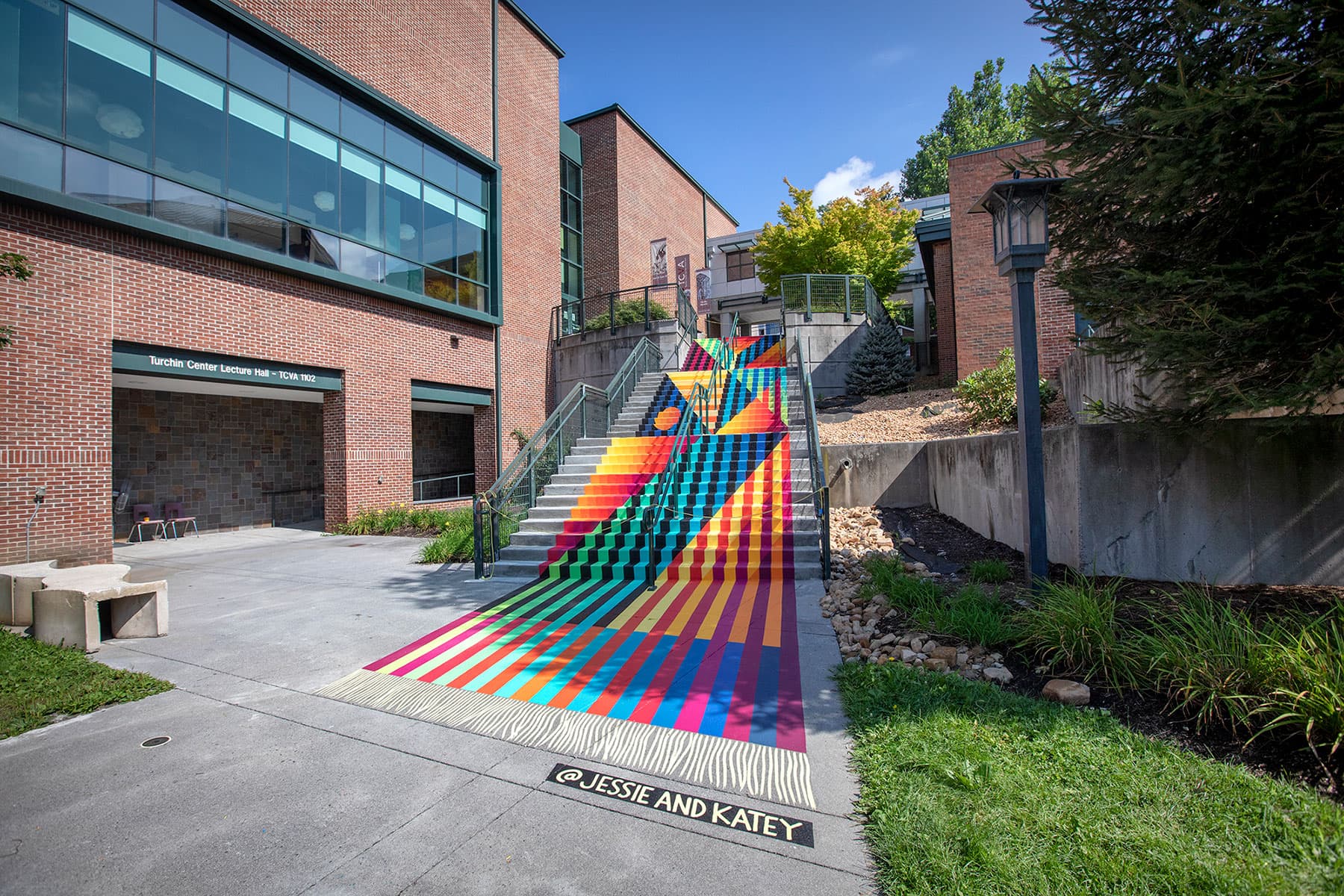 The newly painted staircase in August 2020, created by Baltimore-based artists Jessie Unterhalter and Katey Truhn. The concept for the mural takes it cues from textiles. The design is a geometric-painted stair runner that runs from the top of the 36-step staircase, flowing to the bottom of the steps and beyond, and terminating with a fringed edge often found on a rug. Photo by Marie Freeman 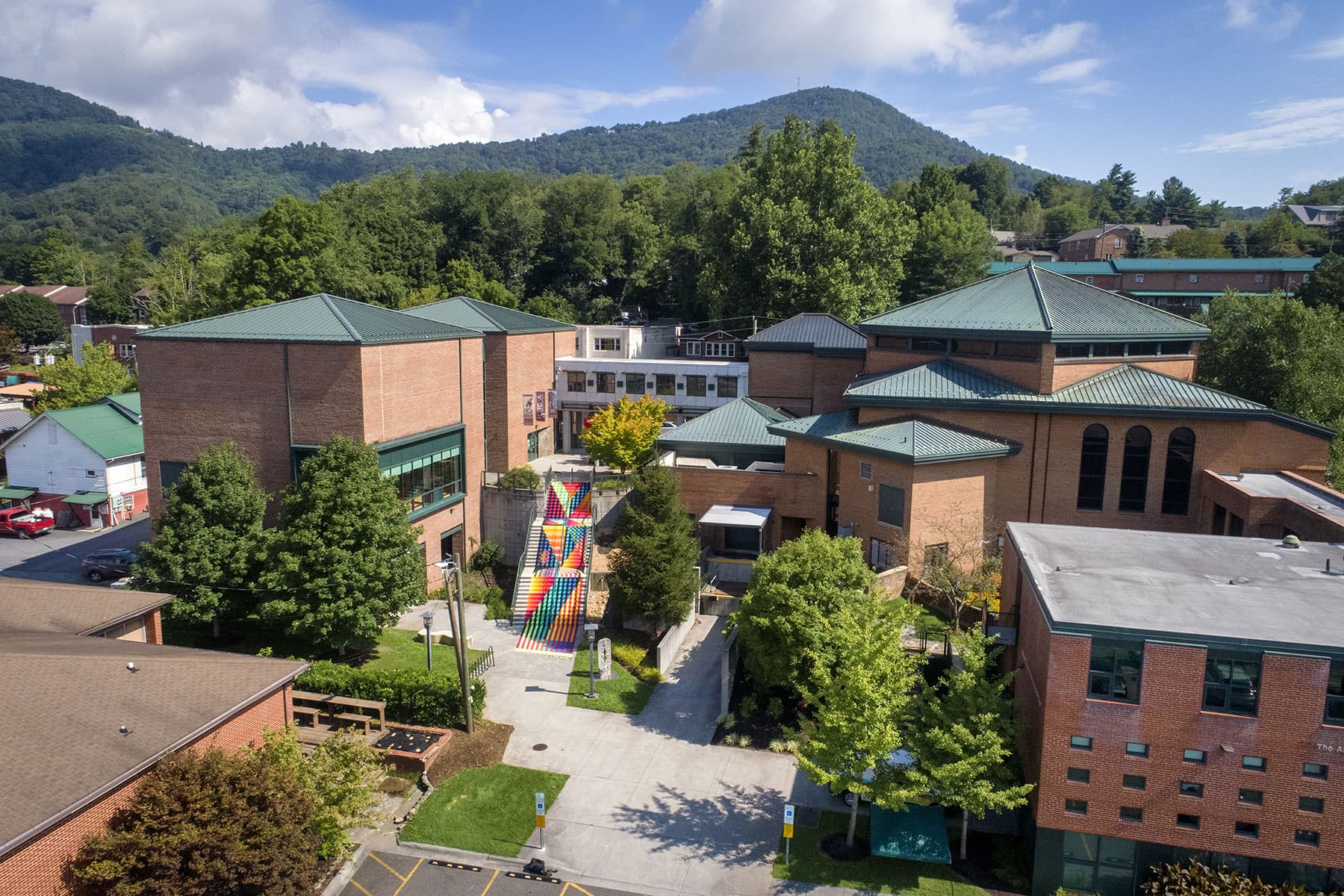 A bird’s-eye view of the staircase, painted during summer 2020. Photo by Marie Freeman 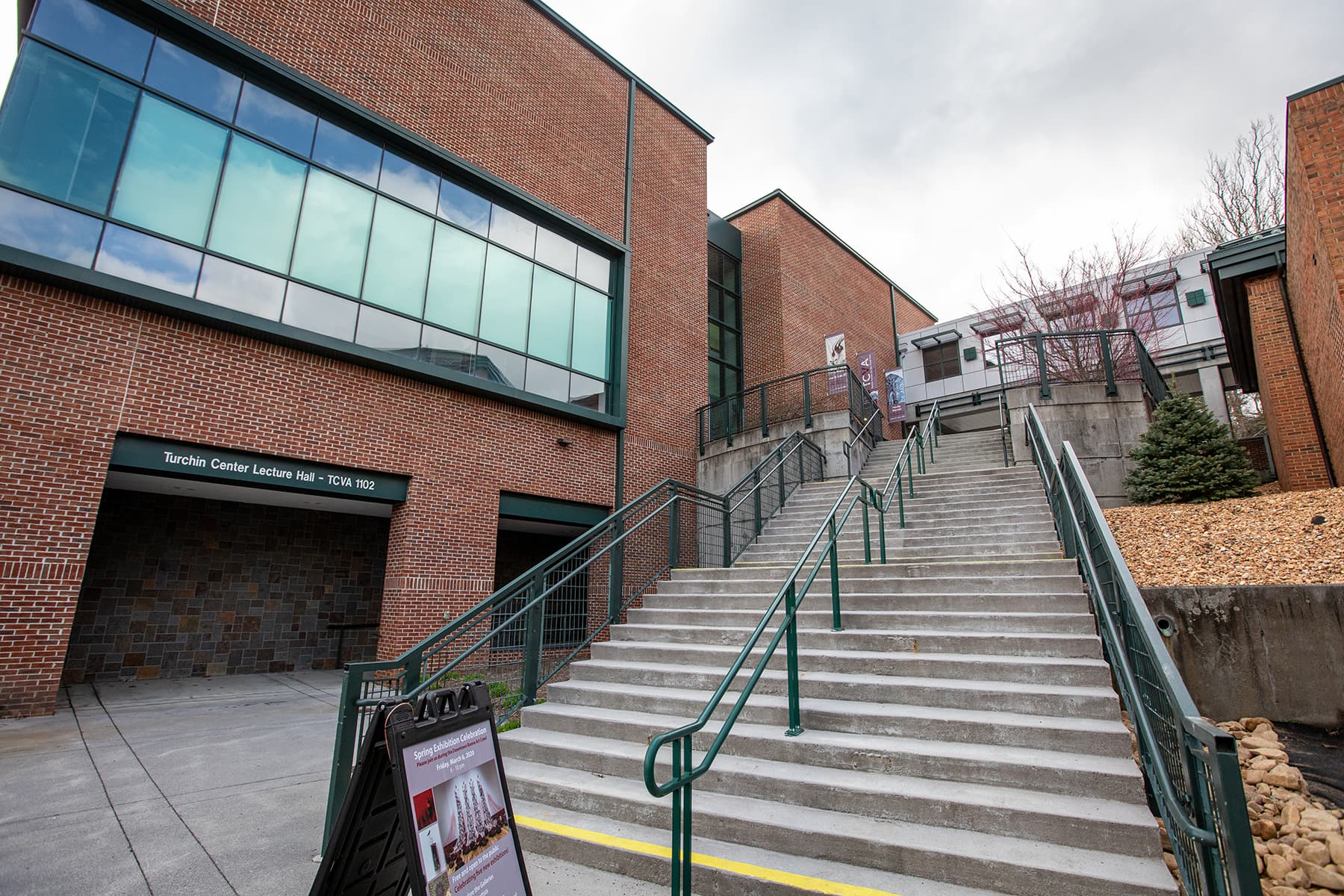 As a next step in developing the Arts Corridor, the university plans to have nationally known artists paint a mural on this campus staircase leading to the Turchin Center for the Visual Arts. Photo by Marie Freeman 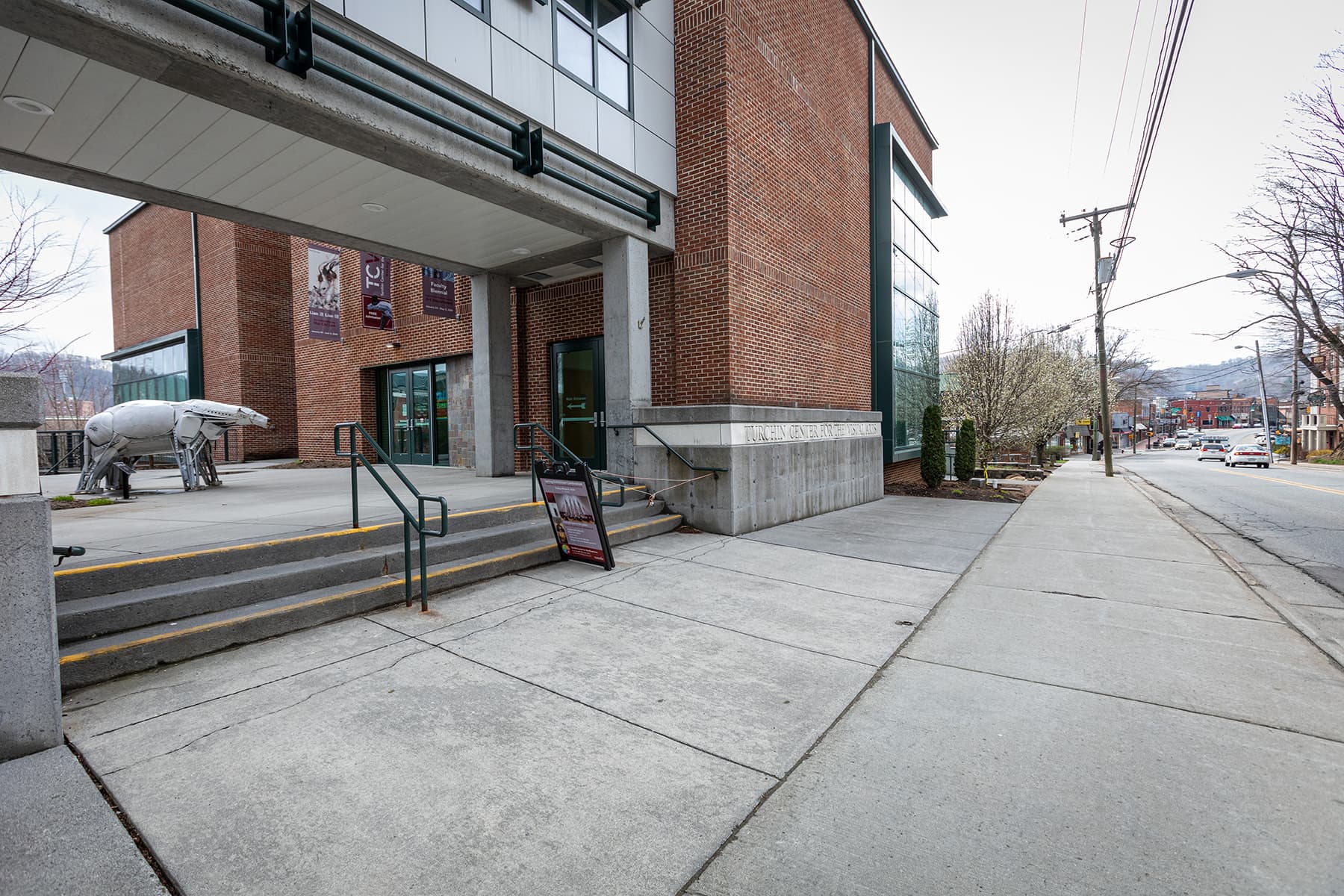 Once complete, the Arts Corridor — which begins south of Rivers Street as Blue Ridge Way — will unite the two halves of campus and guide people walking through campus to the Turchin Center for the Visual Arts’ gateway to King Street, pictured. Photo by Marie Freeman 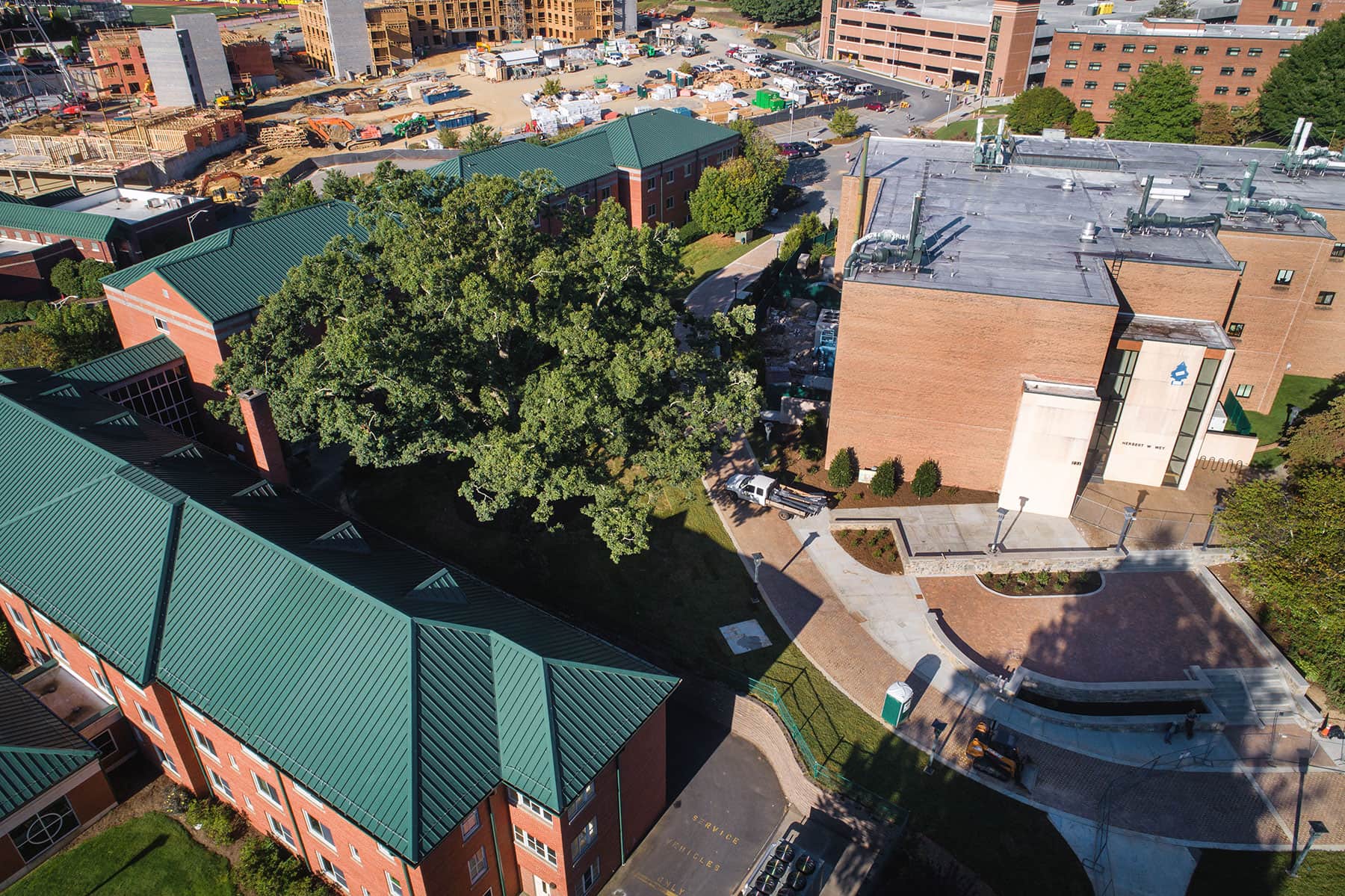 Blue Ridge Way, the first completed section of the Arts Corridor, winds from Stadium Parking Deck, pictured at top, past Wey Hall and the campus’s longest living tree, center, to the Schaefer Center for the Performing Arts. Photo by Marie Freeman

The first portion of the Arts Corridor, Blue Ridge Way, was completed in August 2019. In summer 2020, the university brought nationally known artist duo Jessie Unterhalter and Katey Truhn to paint a mural, called “Transit Candy,” on the campus staircase leading to the Turchin Center for the Visual Arts (TCVA), which is located on the King Street end of the corridor.

A steering committee was formed to help guide the development of the Arts Corridor, beginning with the section located north of Rivers Street. The committee invited sculptors from across North Carolina to submit artwork proposals and then recommended works to university administration for approval. In mid-August 2022, the first phase of Arts Corridor sculptures — seven total — were installed along the stretch of the corridor between TCVA and Edwin Duncan Hall.

The featured works will remain on campus for a two-year period, based on loan agreements with the participating artists. App State’s Turchin Center offers curator-led tours of the corridor, the first of which was held Sept. 2, 2022, as part of Boone’s First Friday Art Crawl event.

Additional phases of the project could include installing sculptures in the area between Chapell Wilson Hall and the Schaefer Center.

The university used Transportation and Parking Reserves funds in 2019 to design and complete the first section of the Arts Corridor, called Blue Ridge Way, since this section improves emergency access and serves as an additional vehicle exit during campus events with large attendance. The mural at the Turchin Center for the Visual Arts (TCVA) was funded by the TCVA with funds raised through contributions.

Future plans for the Arts Corridor may include opportunities for sponsors to support the costs of installing specific works along the corridor, as additional phases of the project are implemented.

All members of the campus and local communities benefit. Eventually, those walking through campus will have a more clearly marked route, which also would guide them to various arts facilities, including the Schaefer Center for the Performing Arts and Turchin Center for the Visual Arts, as well as the gateway to King Street in downtown Boone.

The safety, health, wellness and enjoyment of all members of the App State Community, including visitors, are of utmost concern to the university, as each makes possible personal, academic and institutional success.