The new end zone facility being encased in colorful exterior siding, over which brick will be laid, as of May 13. Click on the image for a full view. Photo by Chase Reynolds

Kidd Brewer Stadium — North End Zone is one of several major construction projects underway or being planned over the next three to five years at Appalachian State University to enhance the Appalachian Experience.

The project supports the strategic plan of Appalachian and the university’s goals and metrics associated with the University of North Carolina System’s strategic plan. This project will benefit students, athletics, academics and the community.

Identified as the “mixed-use athletics facility” project in the Master Plan 2025 (page 96), or sometimes referred to as the End Zone Project, this initiative will transform the north end zone of Kidd Brewer Stadium into a facility providing 80,000–100,000 square feet of space designed to accommodate various athletics and academic uses.

The total budget for the end zone project is $50 million, after an additional $5 million was approved by the Board of Trustees Nov. 5, 2019.

This project is part of the Recreational Village (page 93) described in the Master Plan 2025. 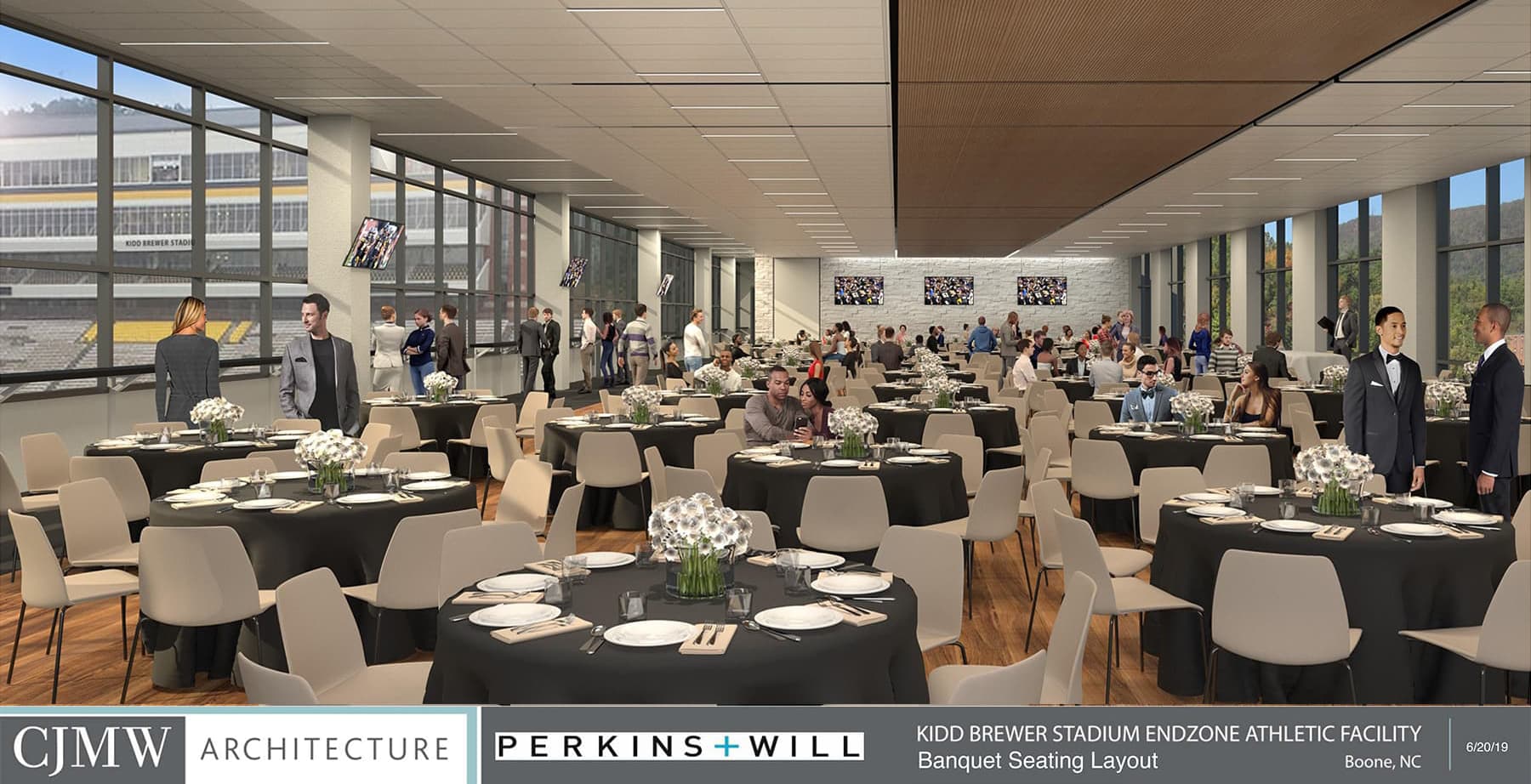 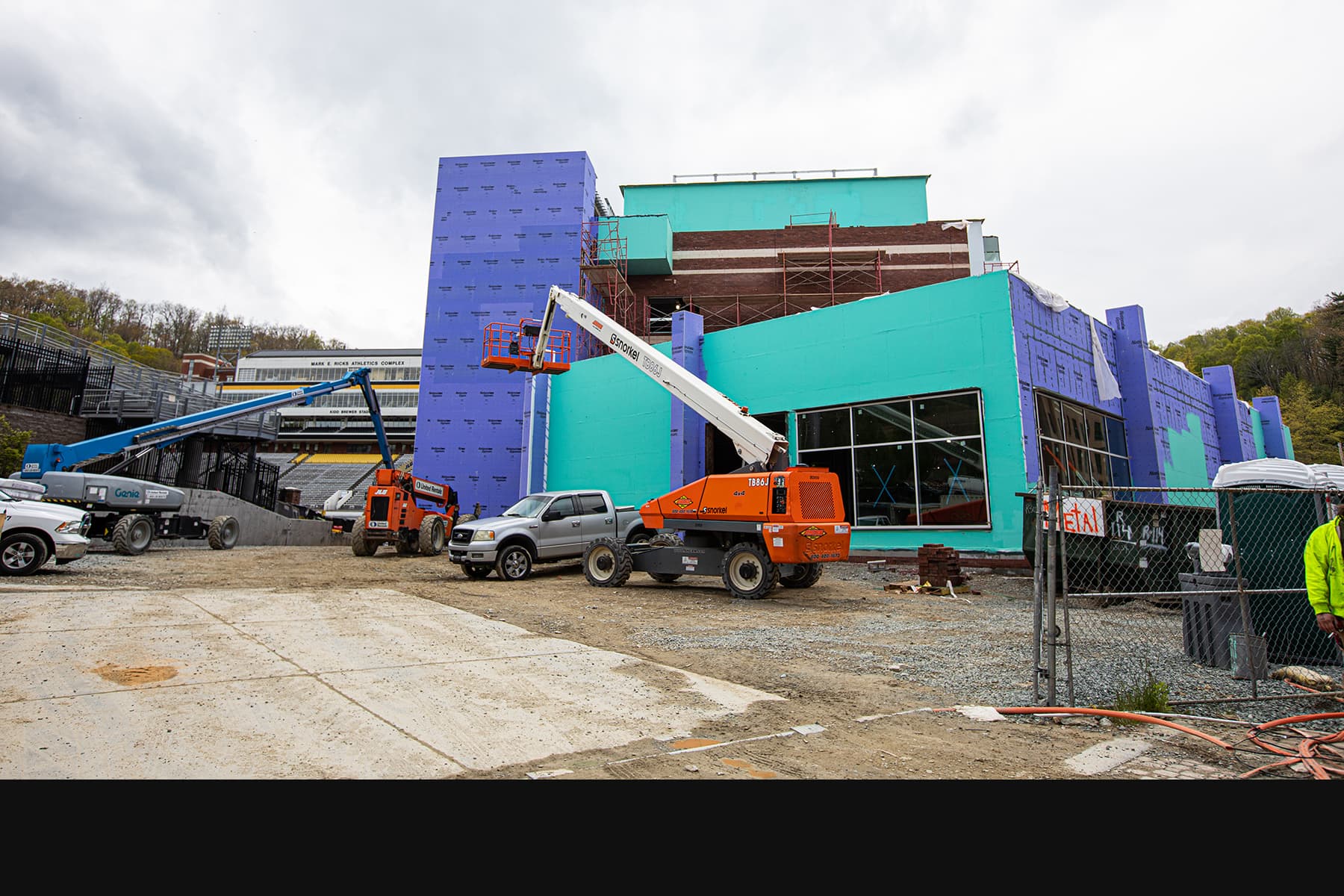 The encasing of exterior siding, over which brick will be laid, nears completion on the new end zone facility as of May 13. Photo by Chase Reynolds 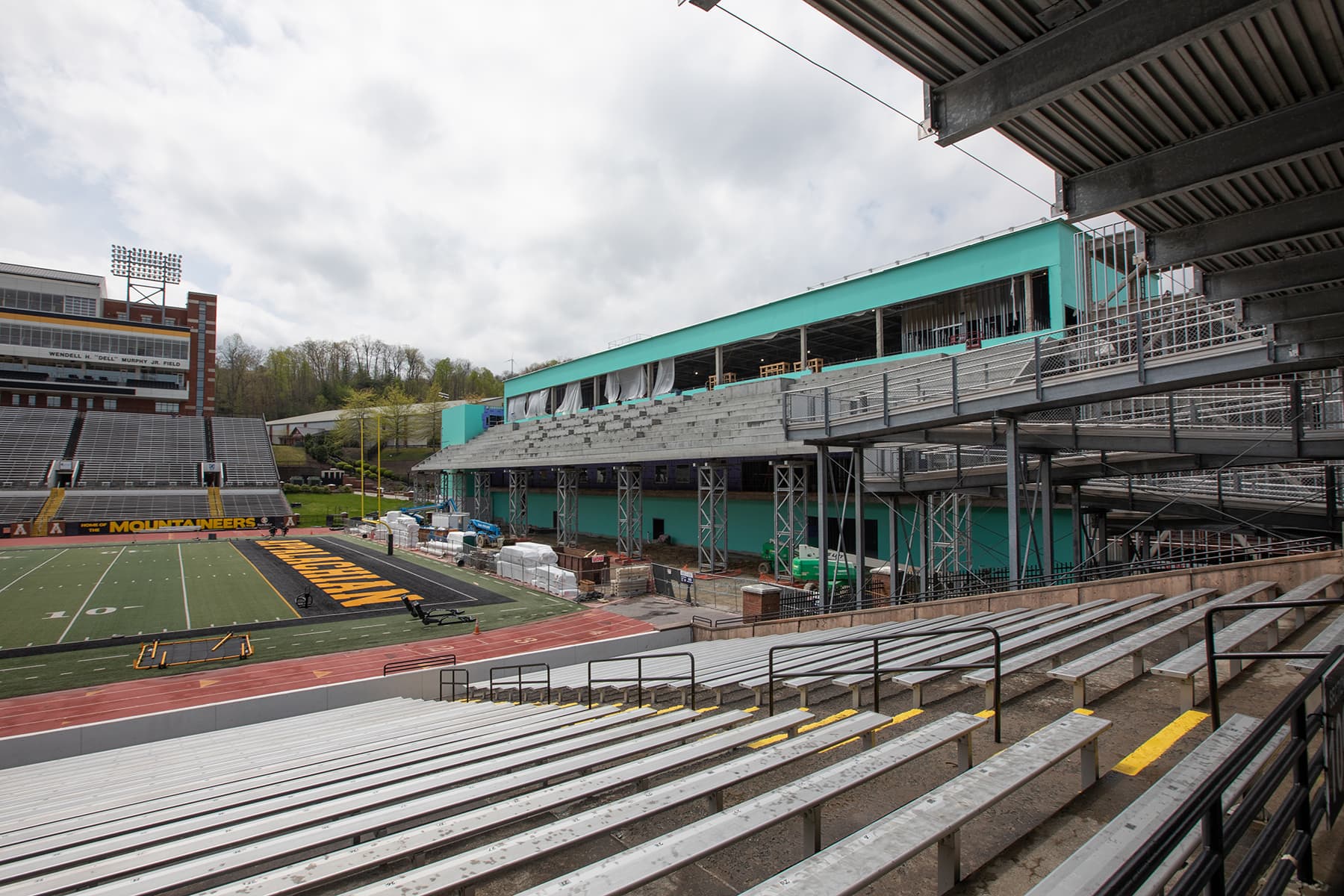 The north end zone facility of Kidd Brewer Stadium, as seen May 6 from the east-side stands. Photo by Chase Reynolds 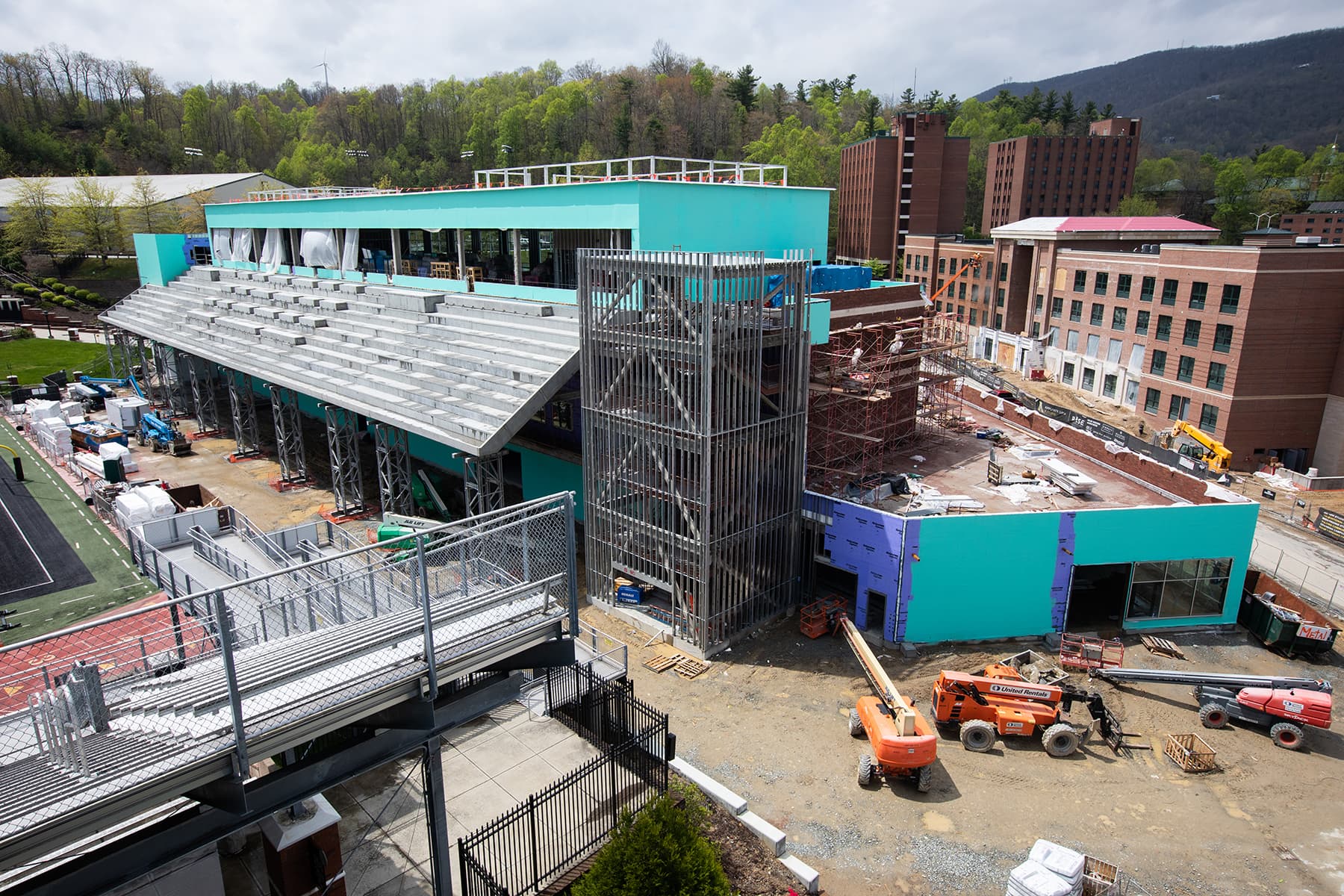 The north end zone facility of Kidd Brewer Stadium, as of May 6. Pictured center is one of the building’s stairwells. Photo by Chase Reynolds 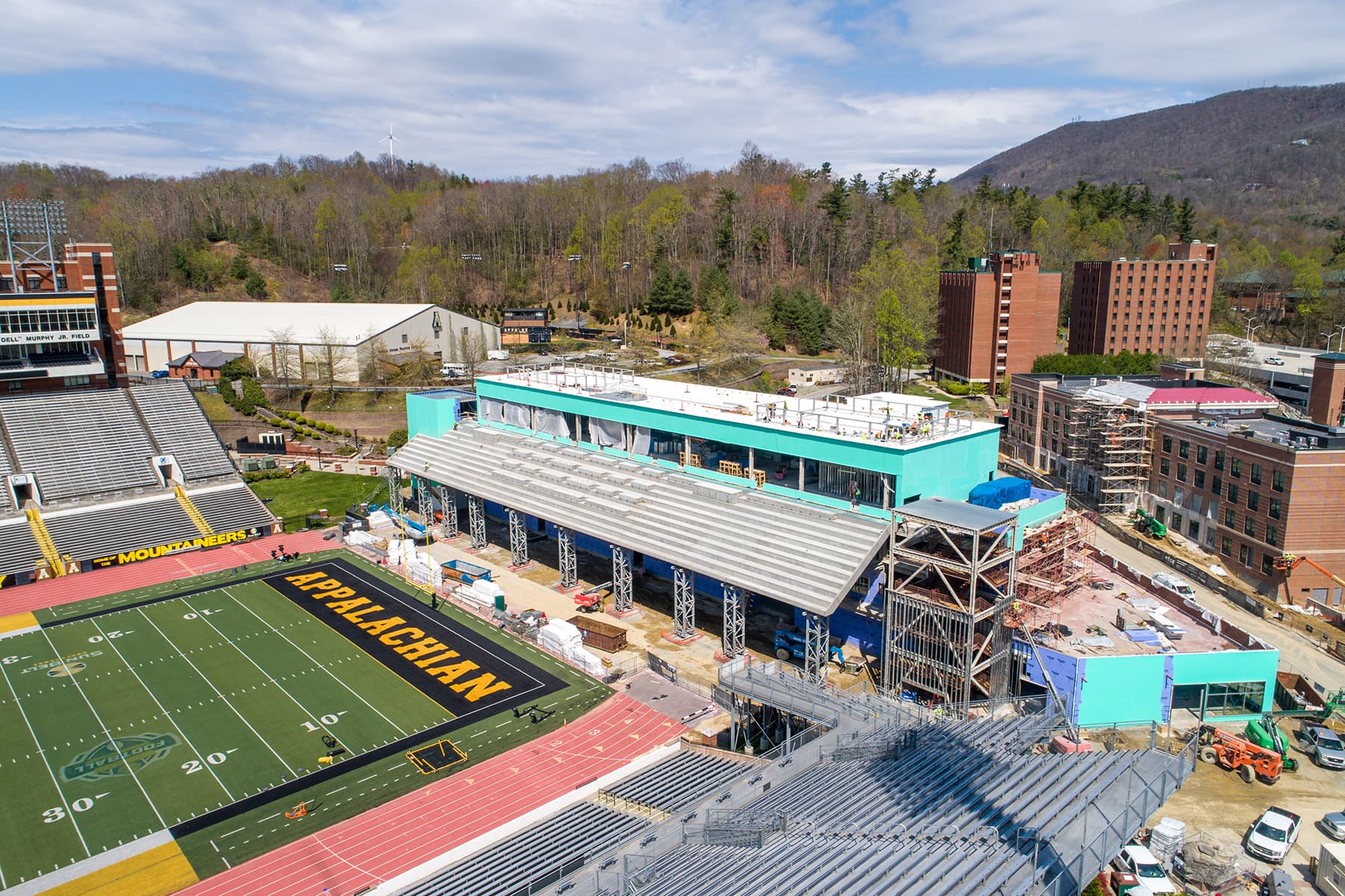 The north end zone facility of Kidd Brewer Stadium, as of April 28. Photo by Marie Freeman 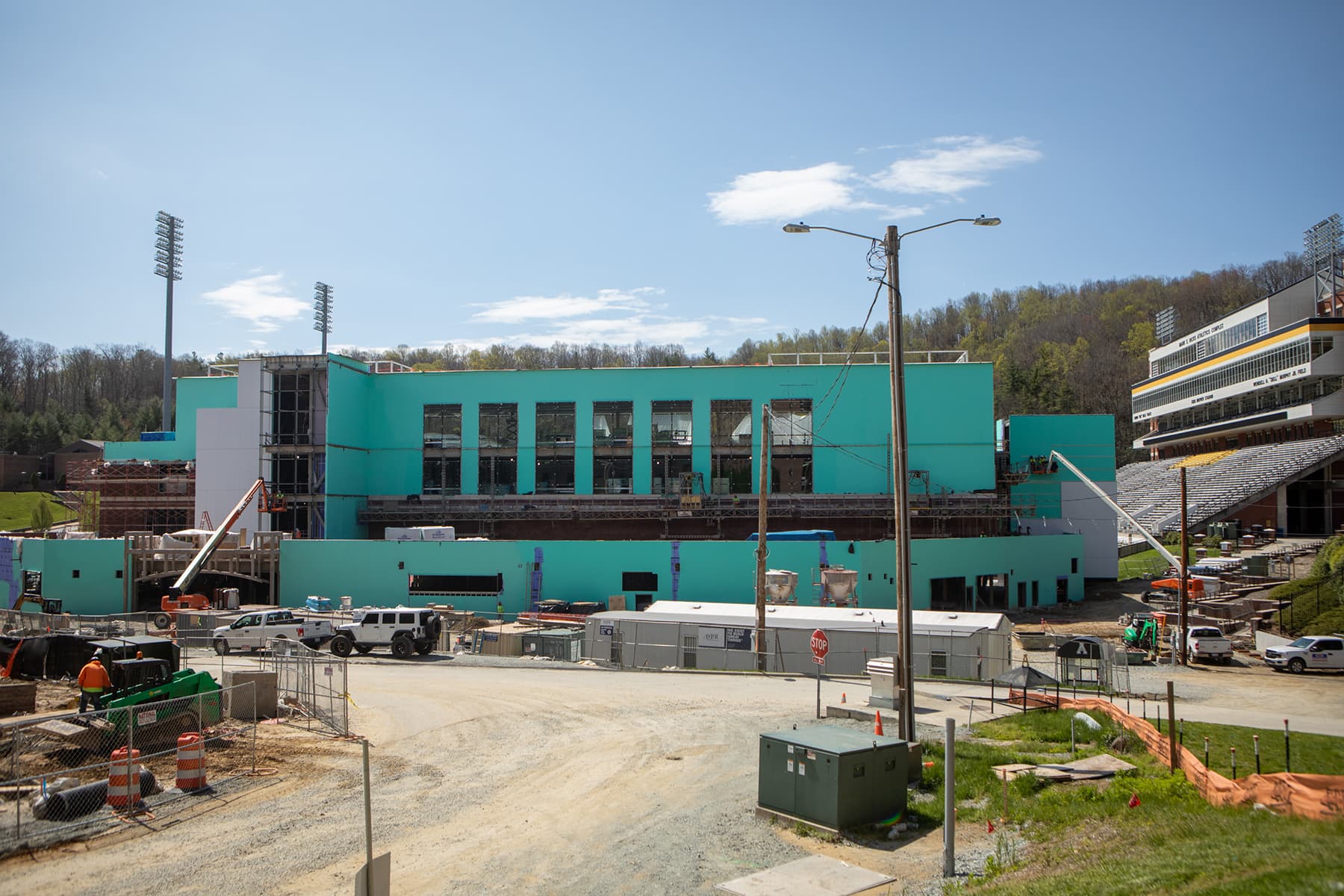 The north end zone facility of Kidd Brewer Stadium as seen from Stadium Heights Drive, as of April 28. Photo by Marie Freeman 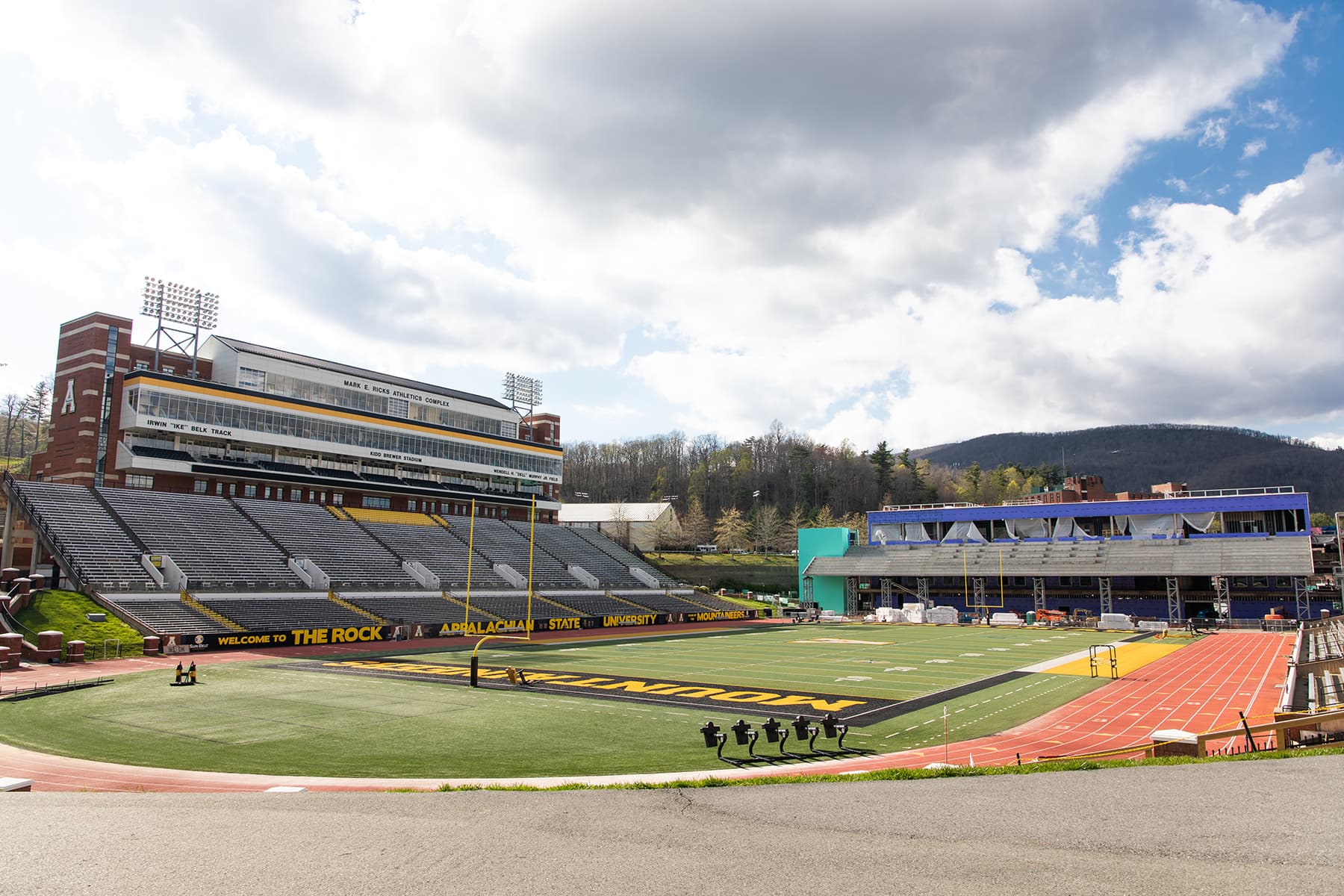 Kidd Brewer Stadium with construction of the north end zone facility, as of April 22. Click on the image for a full view. Photo by Chase Reynolds 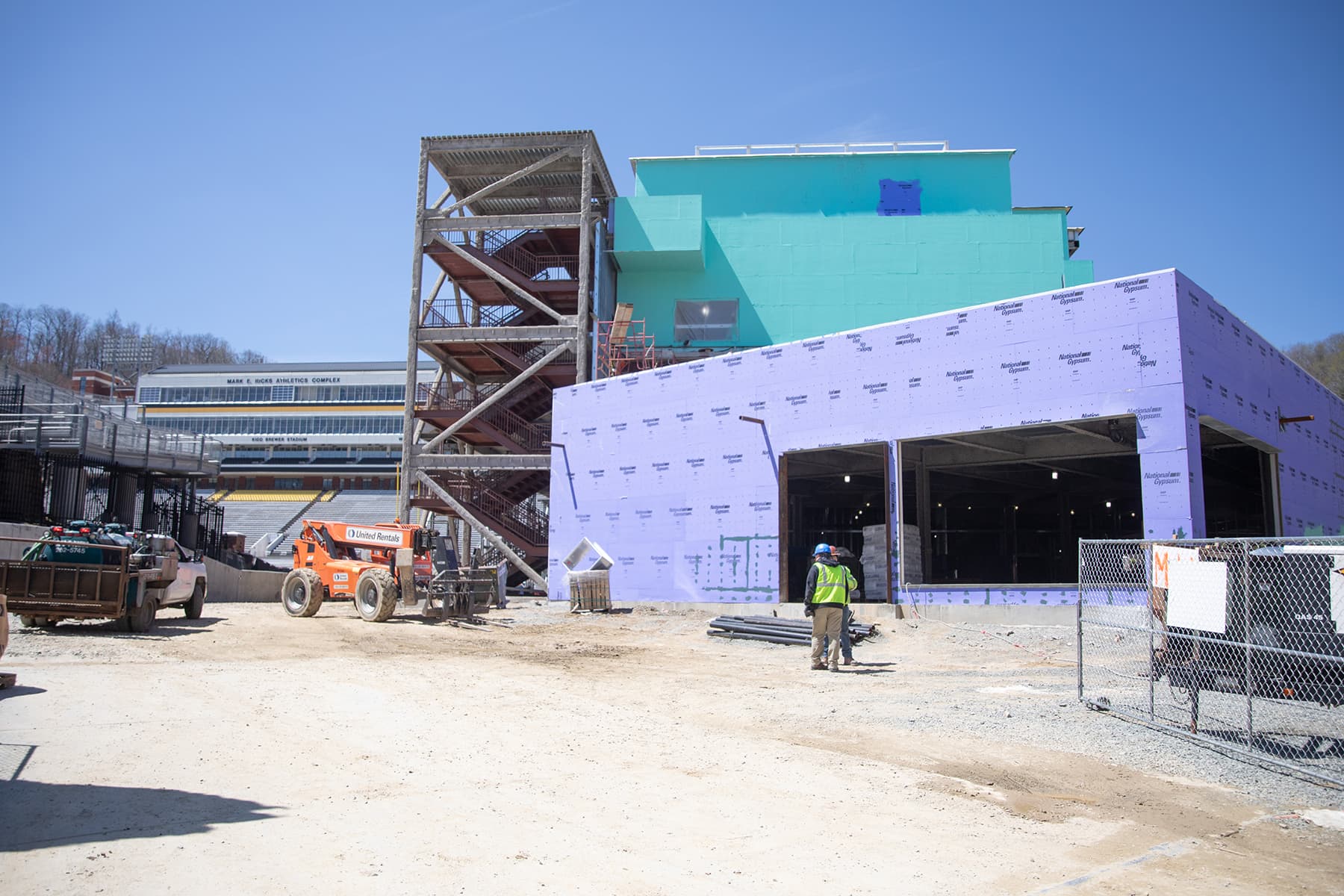 Construction on the north end zone facility, as of April 15. The front space currently encased in purple siding, over which brick will be laid, is the main training weight room. The openings are for large windows and a roll-up door. Photo by Chase Reynolds 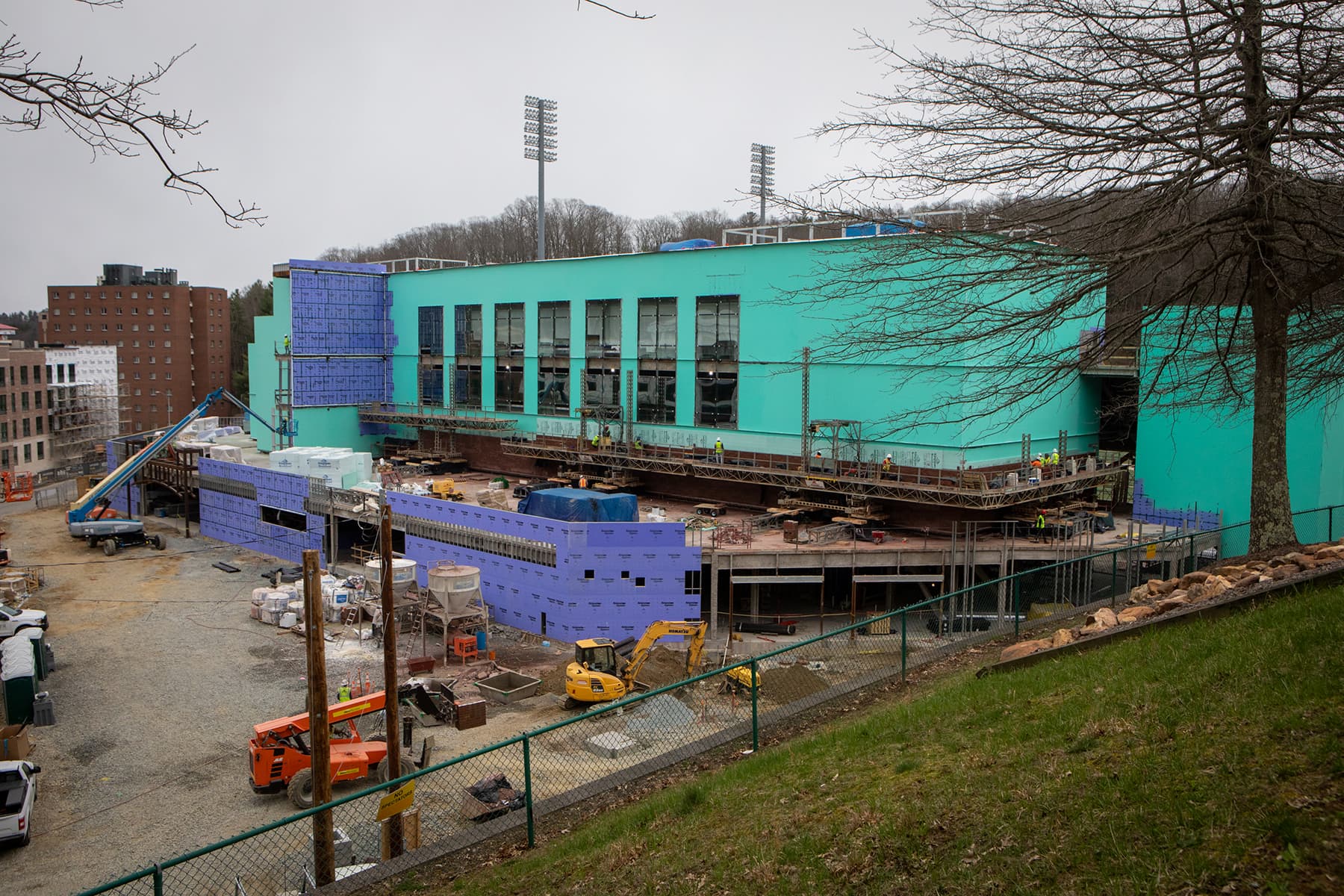 Progress on the end zone facility, as of March 31. Click on the image for a full view. Photo by Marie Freeman 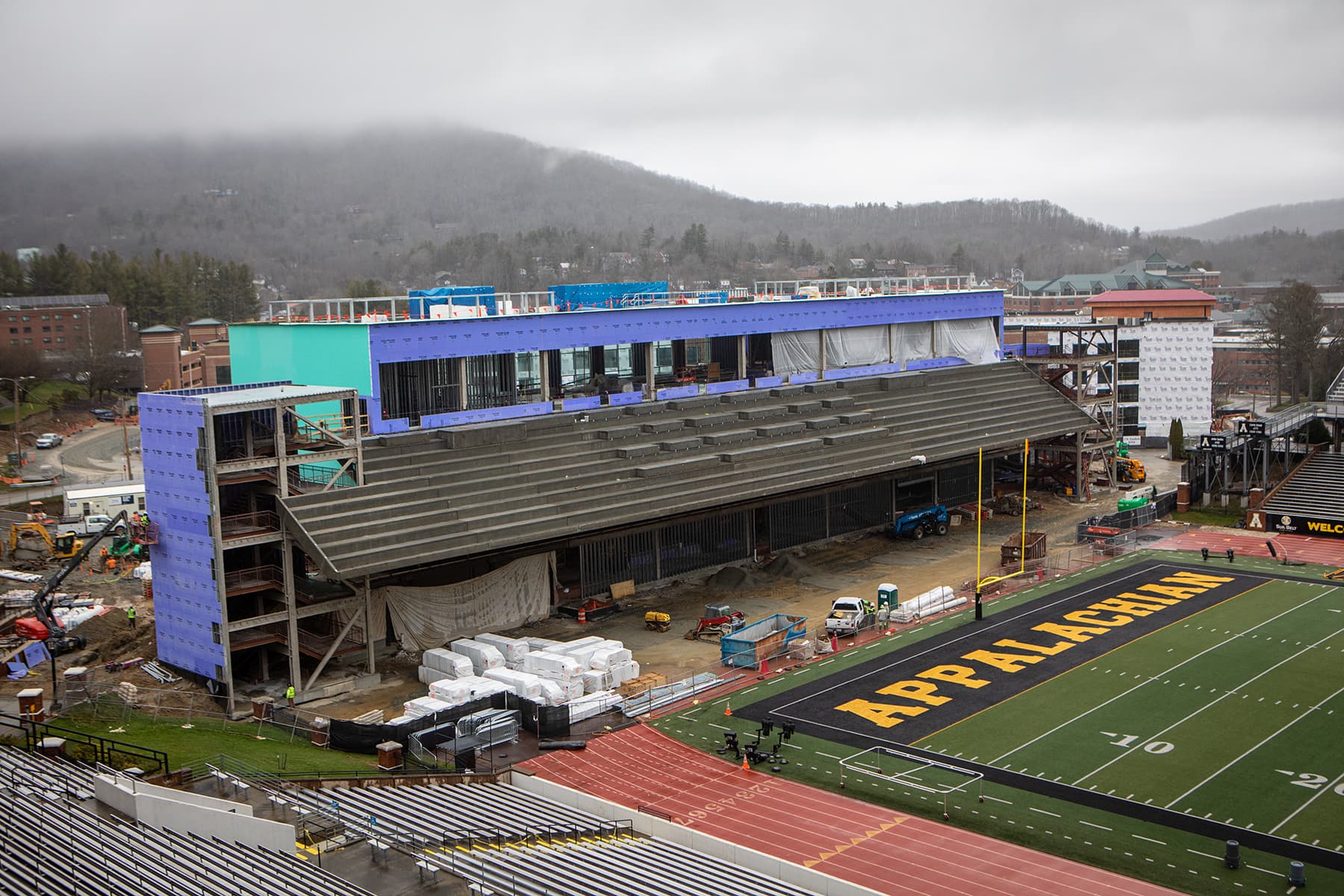 Construction of the end zone facility, as of March 17. Photo by Marie Freeman 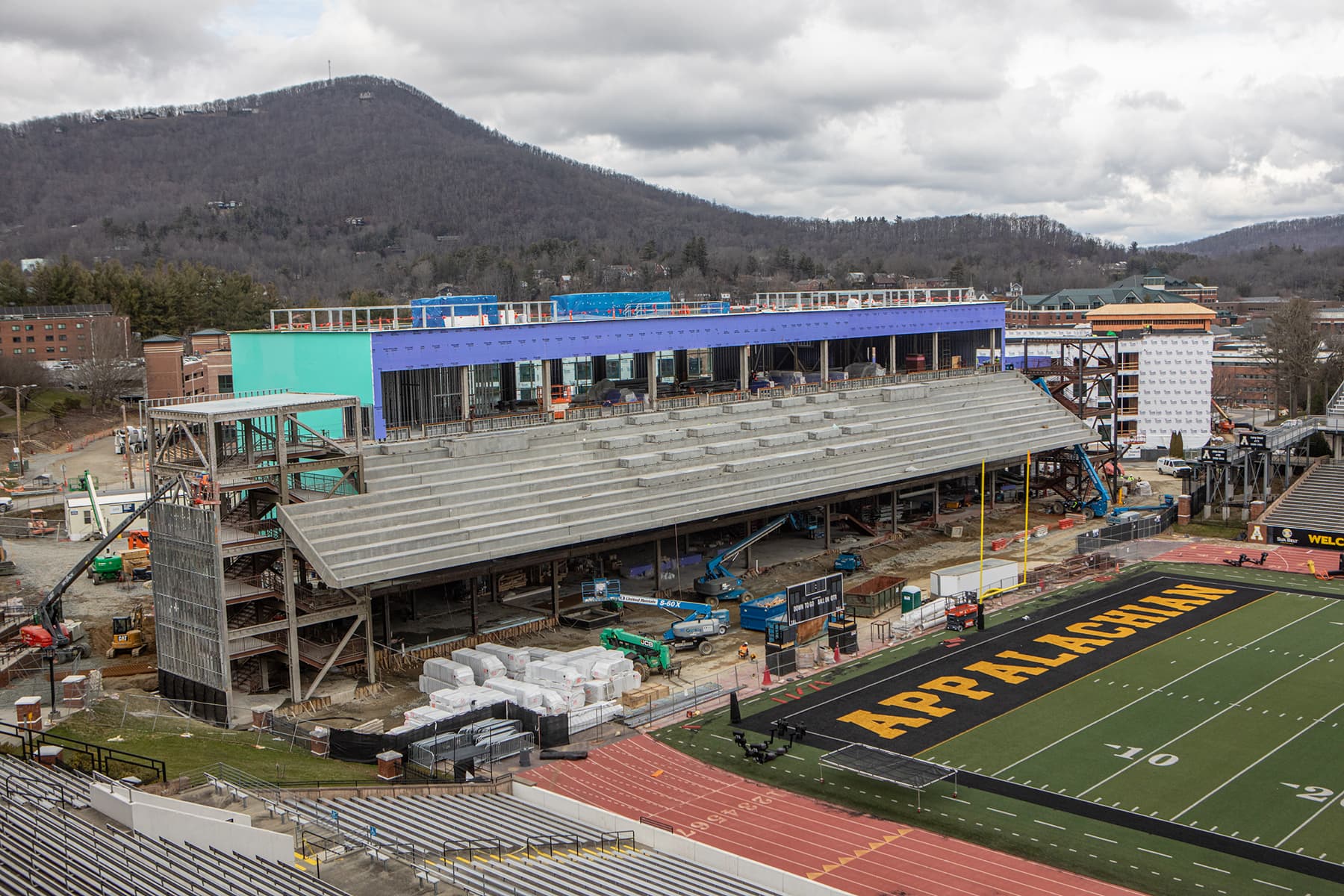 Construction of the end zone facility, as of Feb. 26. Photo by Marie Freeman 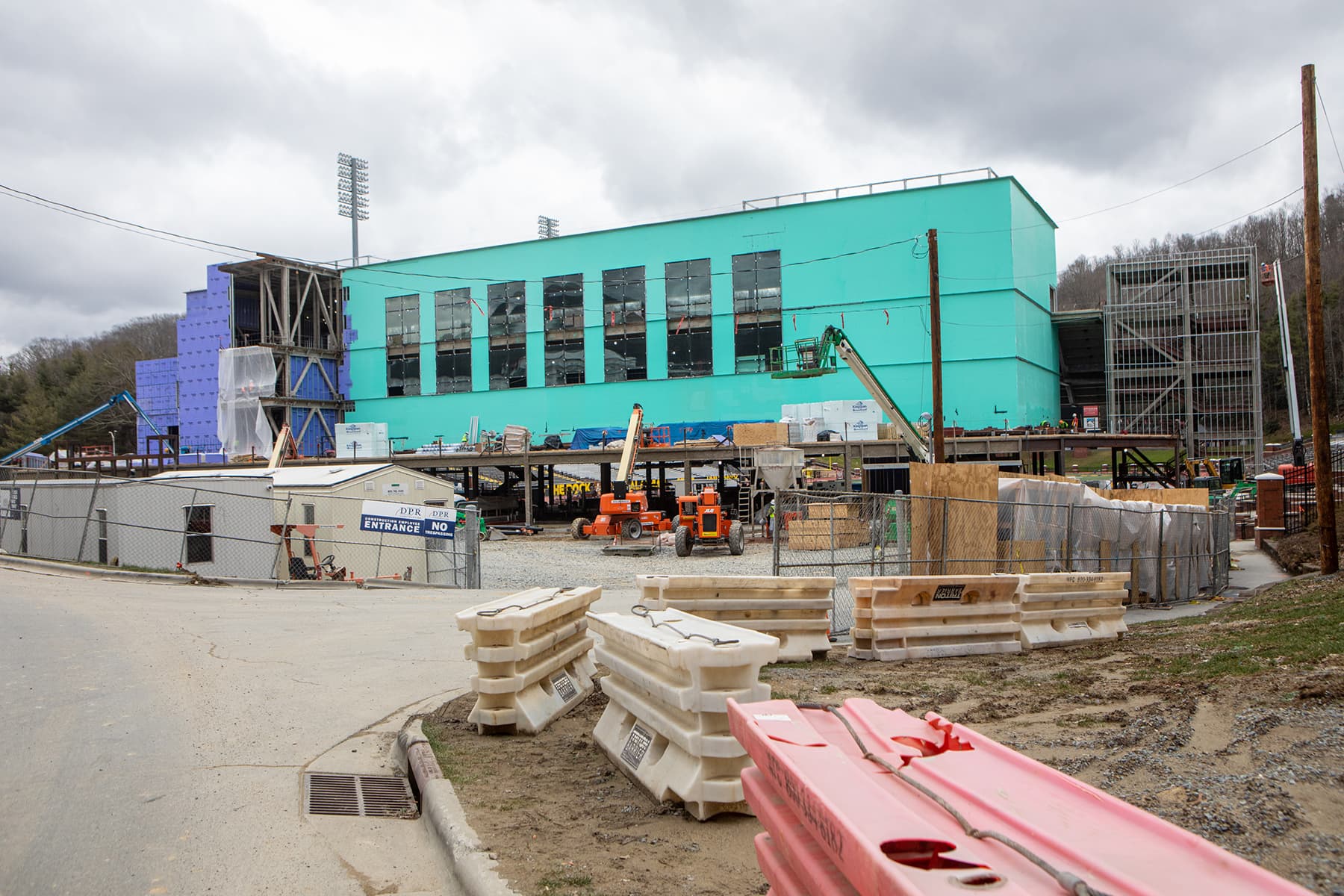 The end zone facility, as seen Feb. 26 from the intersection of Jack Branch Drive and Stadium Heights Drive. Photo by Marie Freeman 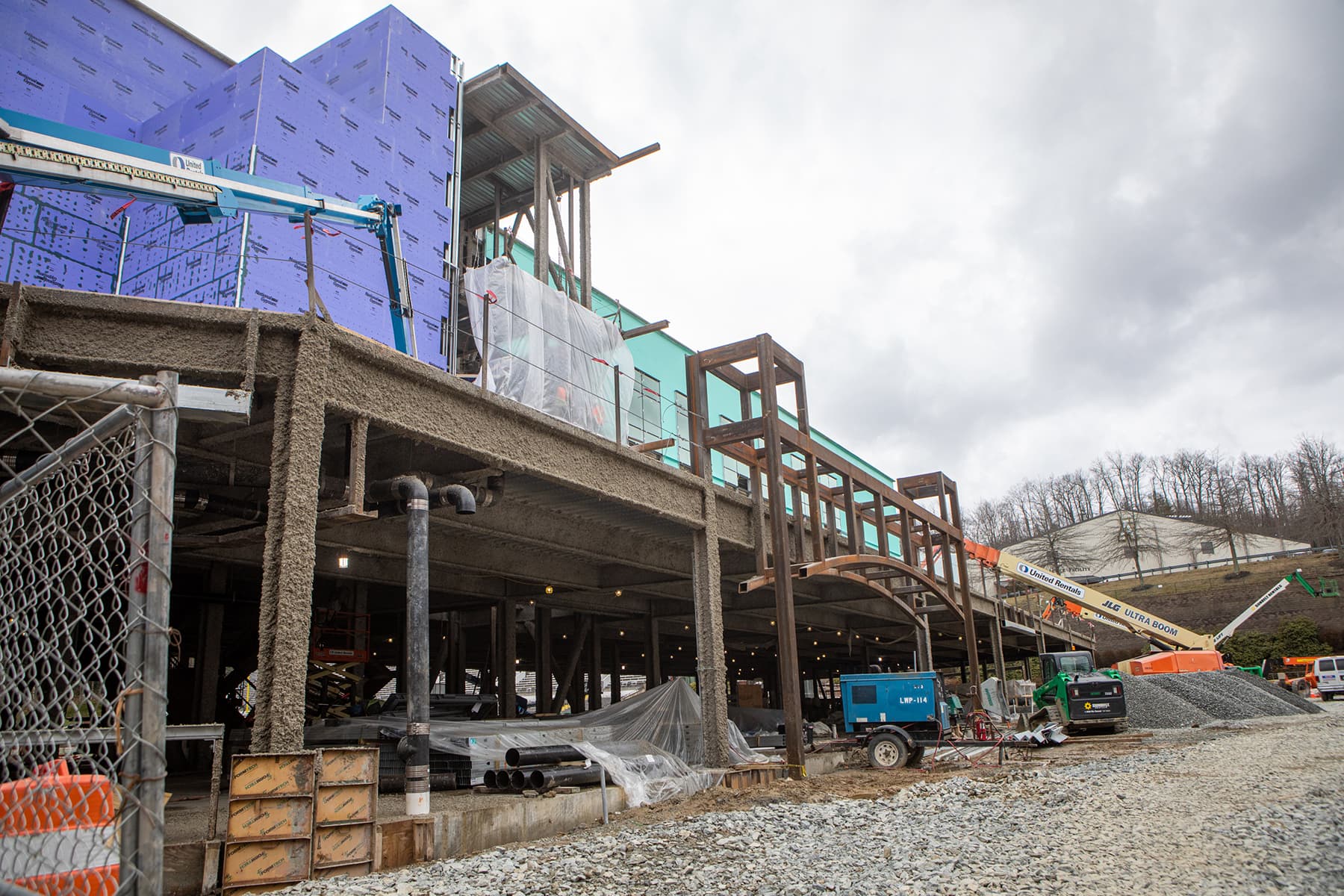 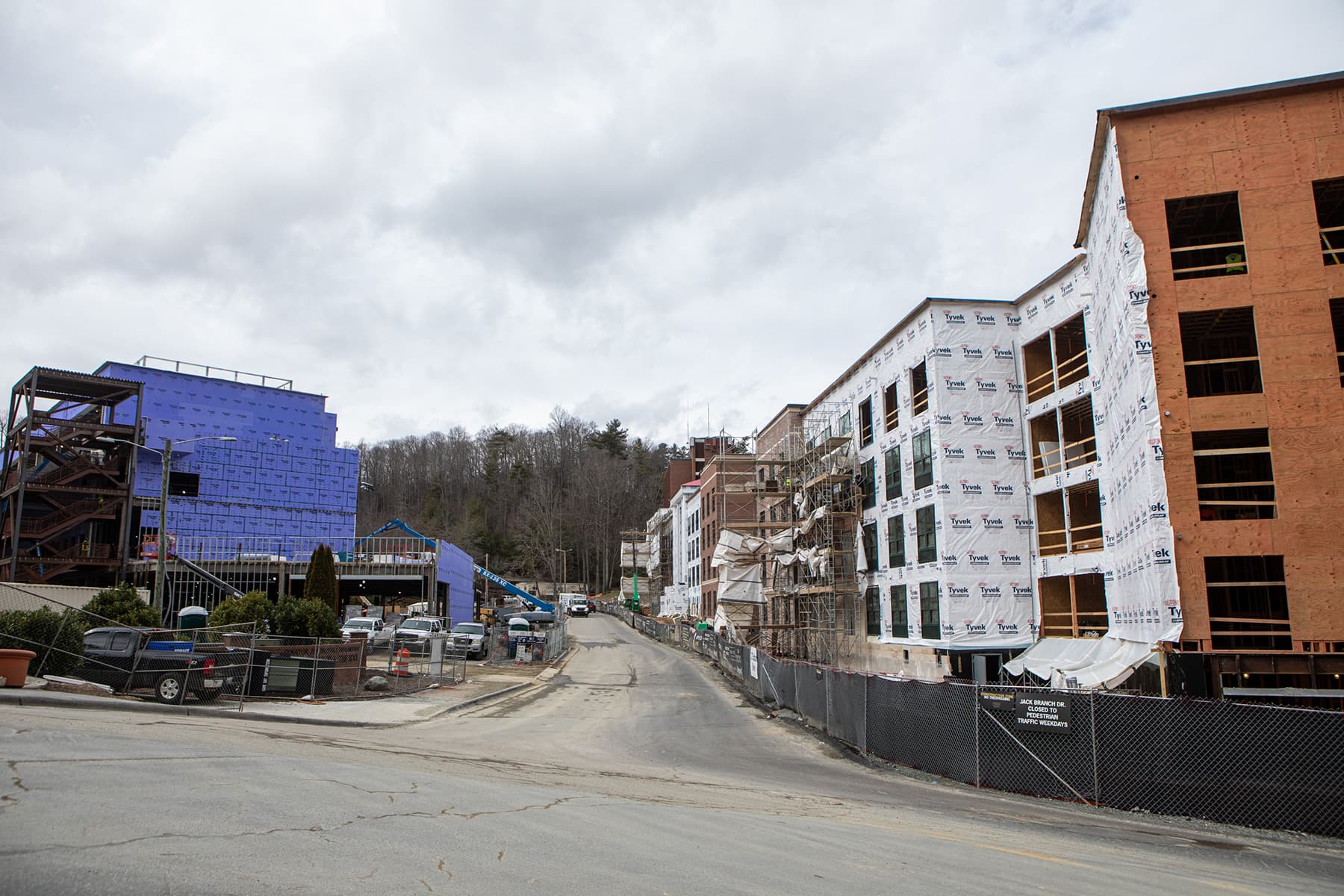 The view down Jack Branch Drive Feb. 26, with the end zone facility at left and the new residence halls on the right. Photo by Marie Freeman

The plan is to open the building in two phases. The first phase will be open by the fall 2020 football season and include retail spaces, box seating, and Campus Dining’s catering space. Watch the live construction feed

D.H. Griffin Companies was selected for the demolition of Owens Field House, which began March 25, 2019, and took two days. Prior to demolition, Appalachian’s Physical Plant salvaged $300,000 worth of materials for reuse in other campus buildings, and Athletics reused most of the furniture. From the debris, all metals were recycled and most of the masonry was used as fill material on another construction site. These actions accrue points toward LEED (Leadership in Energy and Environmental Design) green building certification of the new, mixed-use athletics facility.

On Nov. 5, 2019, Appalachian’s Board of Trustees approved an additional $5 million in spending due to a tight construction market, as well as expenditures up to $2.5 million to replace Kidd Brewer Stadium’s synthetic turf to fit the layout of the new end zone.

Construction began in September 2019. Currently, interior framing, elevator installation, lighting and fire protection are underway. On the exterior, brick work and glass installation are in progress. Structural columns will be added under the cantilevered stadium seating to provide additional support. Adding these supports now will enable the potential addition of an awning in the future.

Between May and August, the new synthetic turf — which needs to be 20 percent larger than the old turf because of the removal of the track to accommodate the new end zone facility — will be installed. The track is being relocated to the App 105 property. The existing turf was nearing the end of its serviceability, making an addition over the exposed track area impractical. The project also includes changes in the grading and drainage, as well as new emergency vehicle access points and storm water modifications. The turf designer is CHA Consulting Inc. and the vendor/installer is Astro Turf. Cost: approximately $1.5 million.

The project will be funded through donations to Appalachian Athletics’ “A Mountaineer Impact: A Drive for Excellence” fundraising initiative, club seat revenue, Food Services revenue and debt through Millennial Campus designation, which will be repaid using tenant lease revenue.

In addition to providing an enhanced experience for student-athletes and fans, this facility will be available for use by the entire campus community. It will accommodate various athletics and academic uses, including activities of the athletic training and nutrition science programs. The wider community will also be invited to rent the venue for weddings, receptions and other events.

An enhanced experience for student-athletes and fans can go a long way in recruiting new students. It also can cultivate donors, which in turn supports scholarships for students needing financial assistance to attend college.

Construction at App State continues because:

• Discontinuing projects would severely impact project costs to the state, requiring more money to re-start an abandoned project and increasing the risk of material delays and some subcontractors going out of business.

• The new residence halls being built under a public-private partnership constitute a ground lease, whereby a private developer has created a timeline and is managing the construction privately. The financial feasibility of the project is based on a specific timeline tied to the academic year.

• In other construction on campus, bond money was approved by Appalachian’s Board of Trustees and the Board of Governors of the University of North Carolina System. Appalachian has a fiduciary responsibility to execute construction in the shortest time possible. And, much like a homeowner building a new home with a construction loan, the university is already making payments on the project. 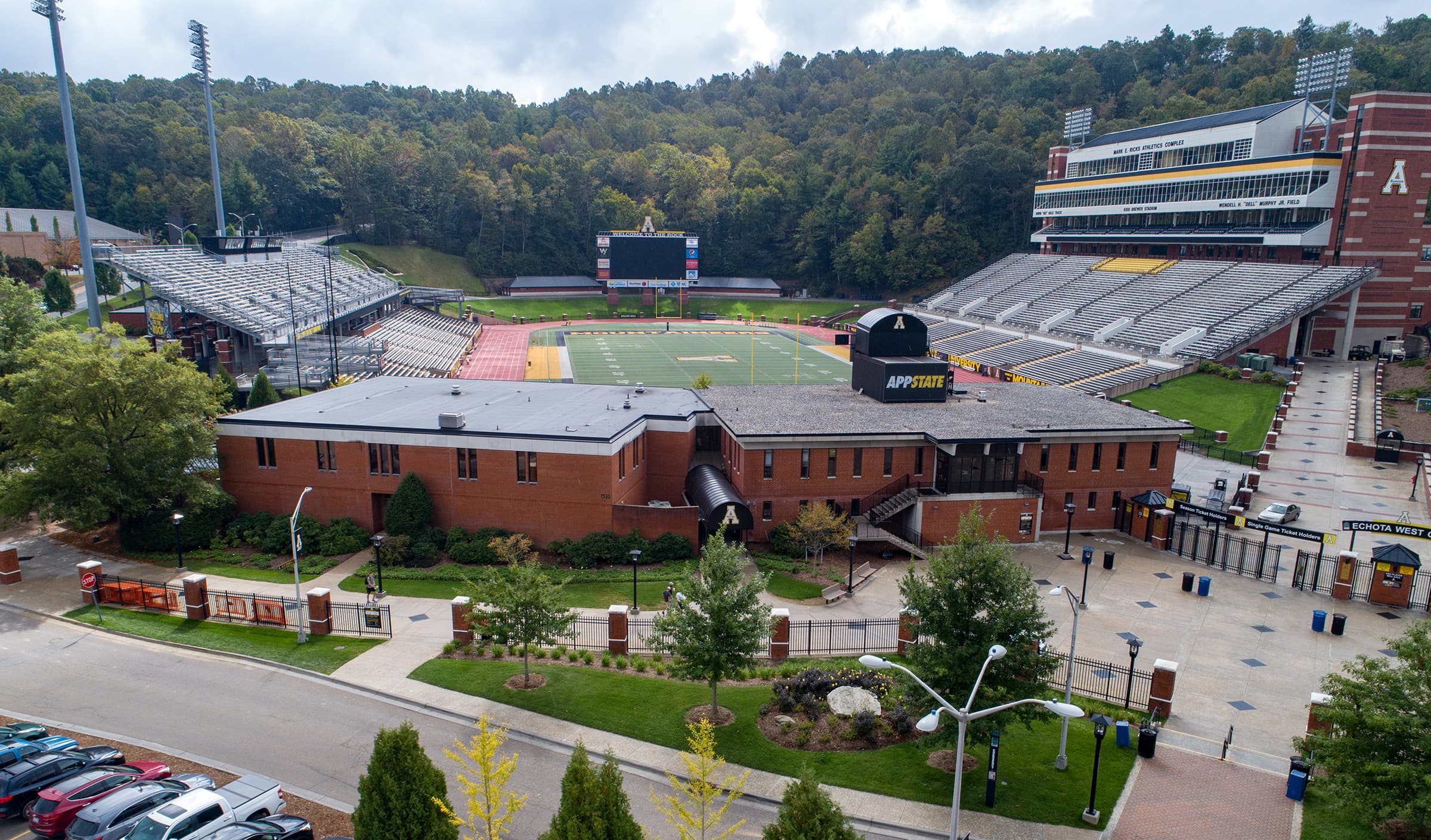 Owens Field House, pictured in foreground, prior to demolition. Photo by Marie Freeman