Renovation in progress at Sanford Hall, as of June 30. Click on the image for a full view. Photo by Marie Freeman

Sanford Hall is one of several major construction projects underway or being planned over the next three to five years at Appalachian State University to enhance the Appalachian Experience.

The project supports the strategic plan of Appalachian and the university’s goals and metrics associated with the University of North Carolina System’s strategic plan. It will benefit students, academics and the community.

Built in 1968, Sanford Hall is structurally sound and meets the basic safety codes established in the late 1960s, but it needs renovation to outdated HVAC, electrical and fire suppression systems, air conditioning, classrooms and office space. The $18 million renovation is expected to extend the life of the building by as much as 40 years.

The renovated Sanford Hall will house the Department of English and feature improved classrooms and larger offices, as well as more common areas and collaborative workspace for students. The Department of Languages, Literatures and Cultures, which also had been in the building, will remain in the renovated L.S. Dougherty Hall, where it moved last summer. 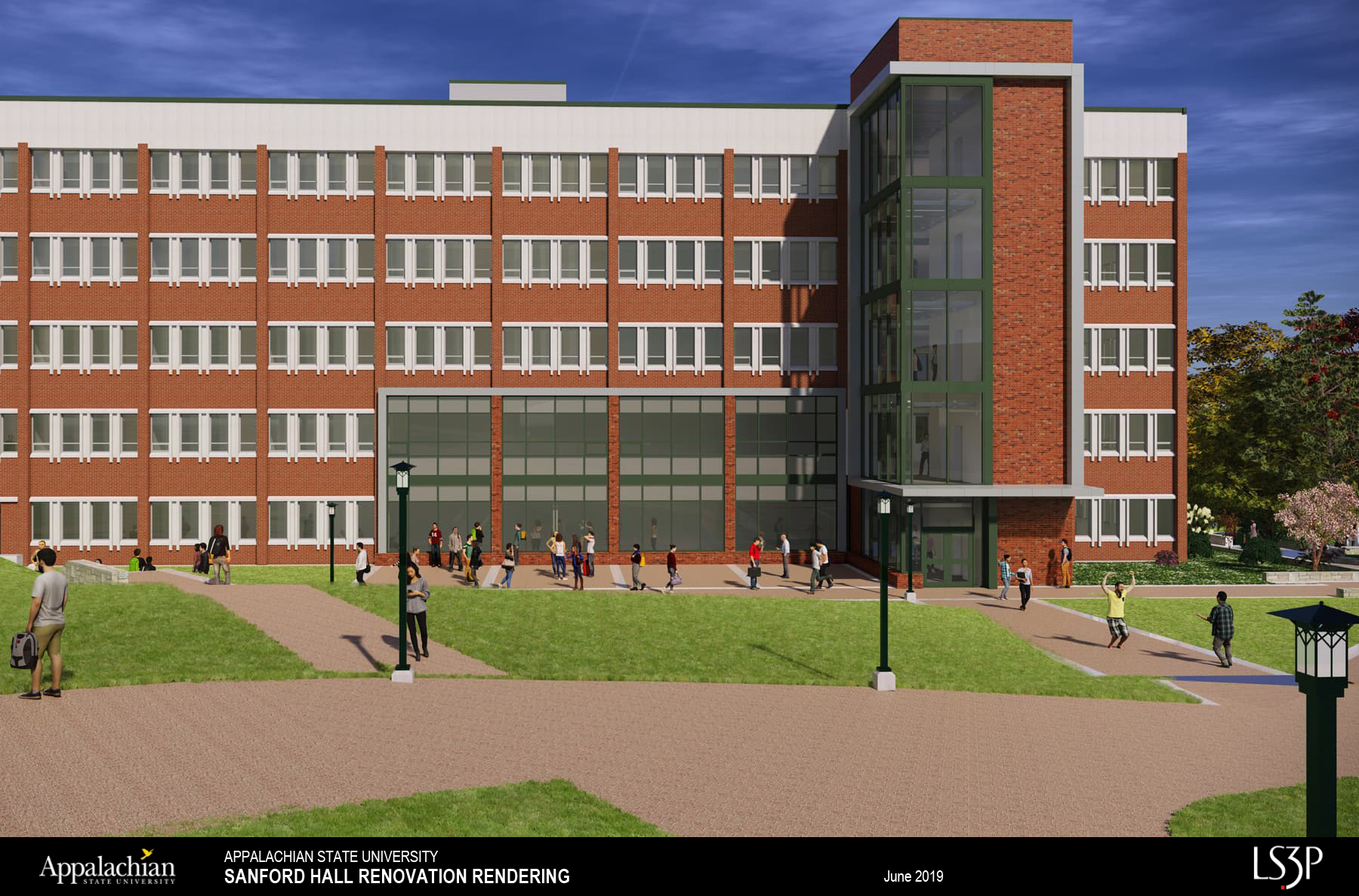 An architectural rendering of the renovated Sanford Hall. Image courtesy of LS3P Associates. 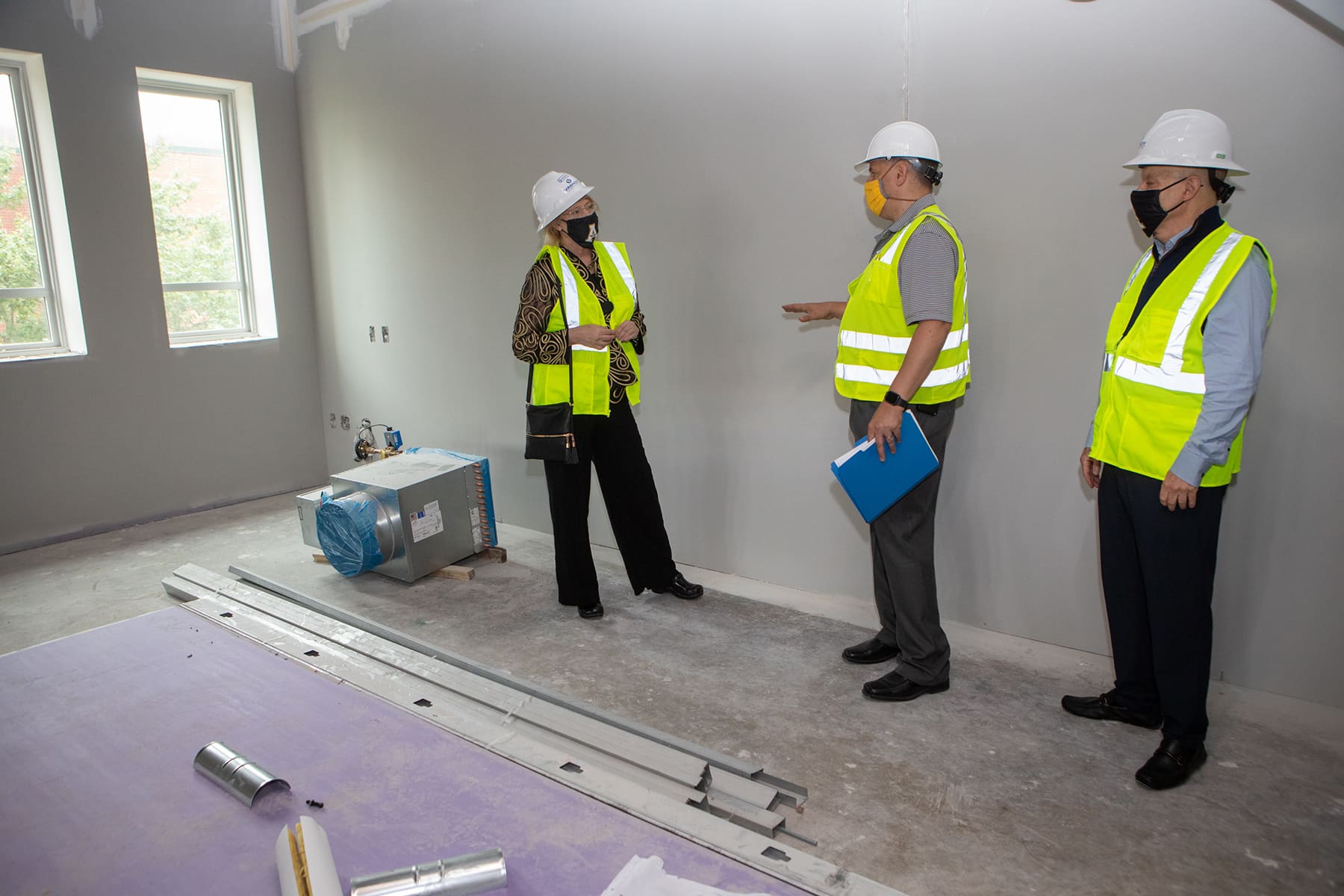 Appalachian State University Chancellor Sheri Everts listens as Nick Katers, associate vice chancellor for facilities management, gives her an update June 30 on the status of Sanford Hall renovation while inside the building. Listening at right is John Blackburn, chair of Appalachian’s Board of Trustees. Photo by Marie Freeman 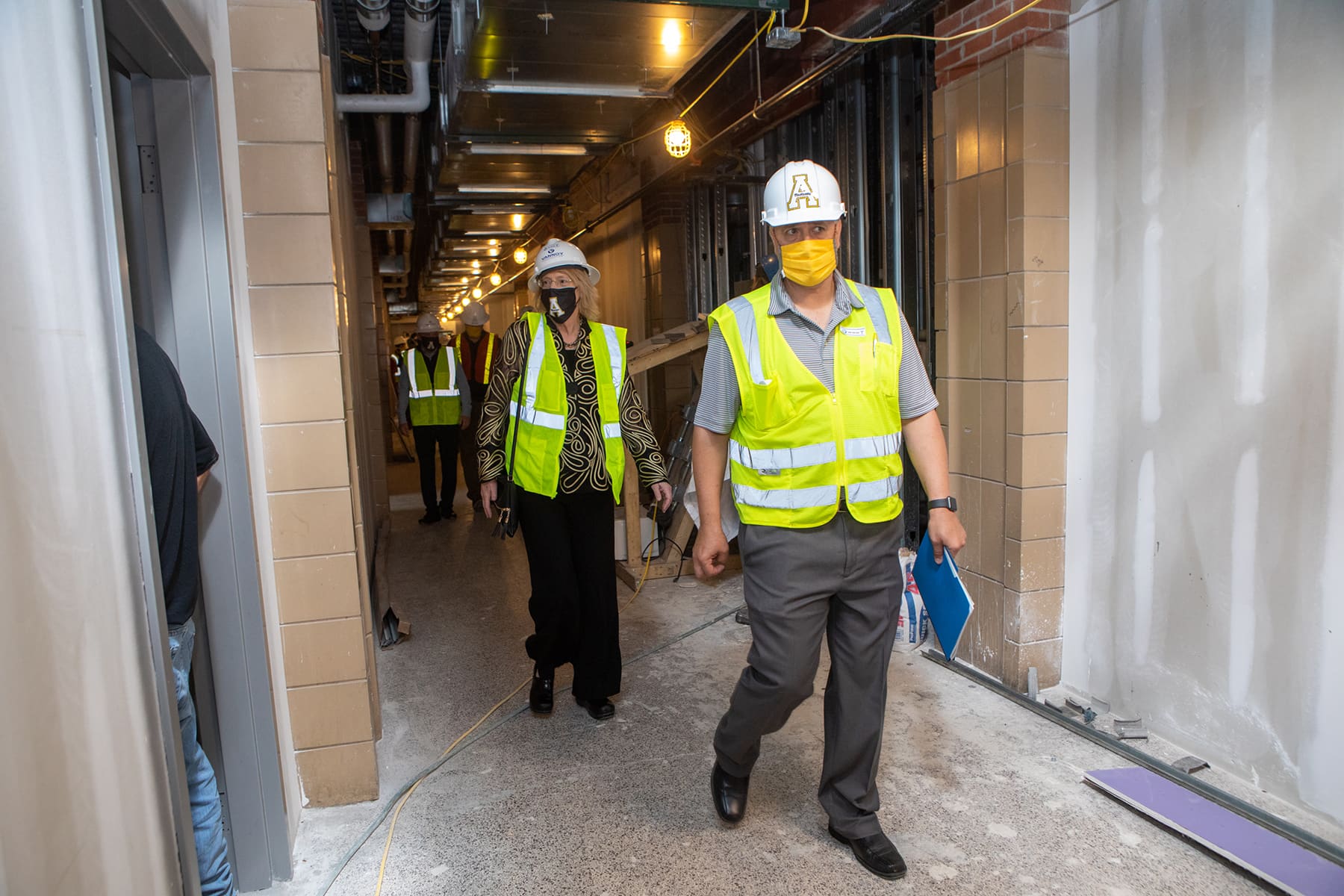 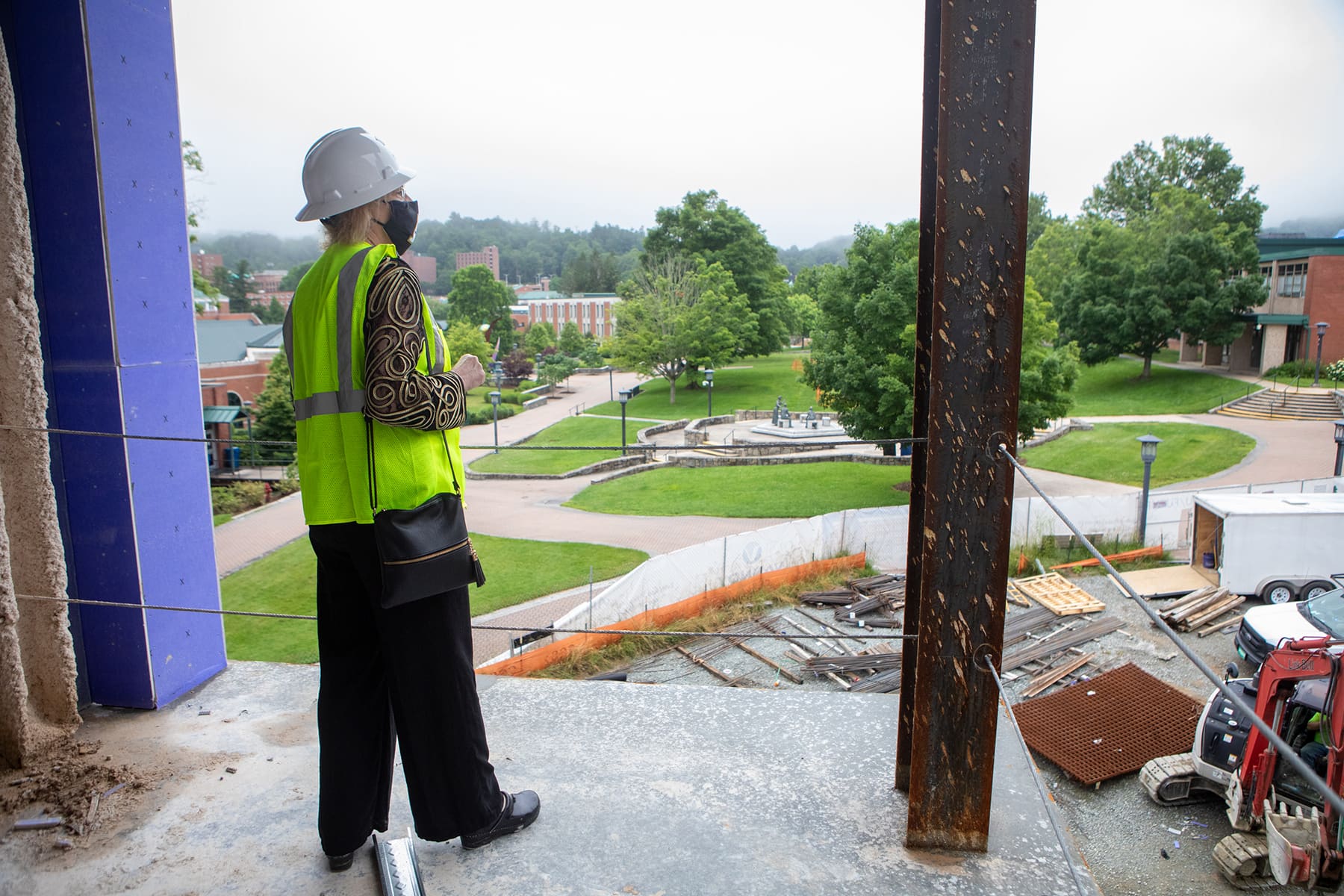 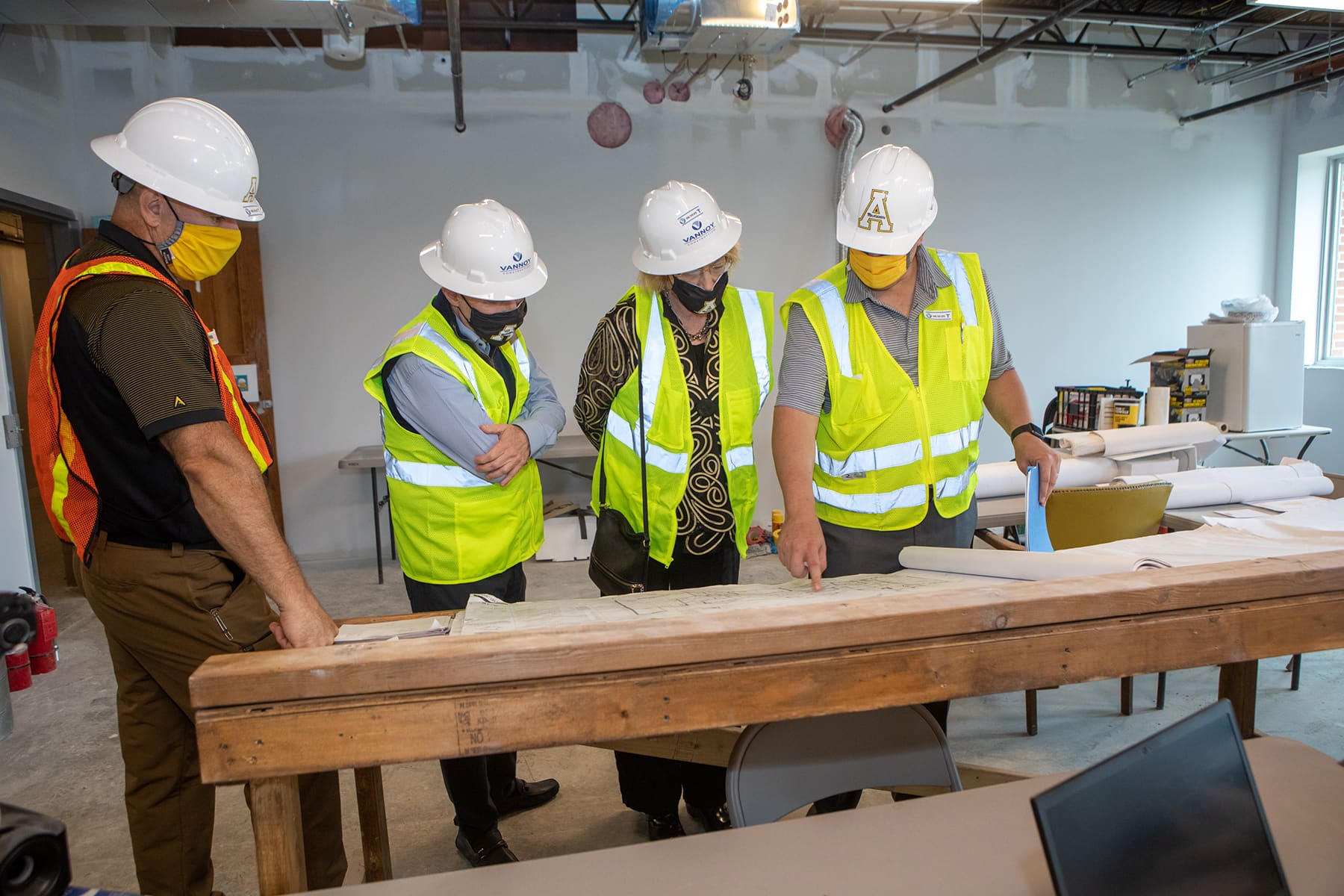 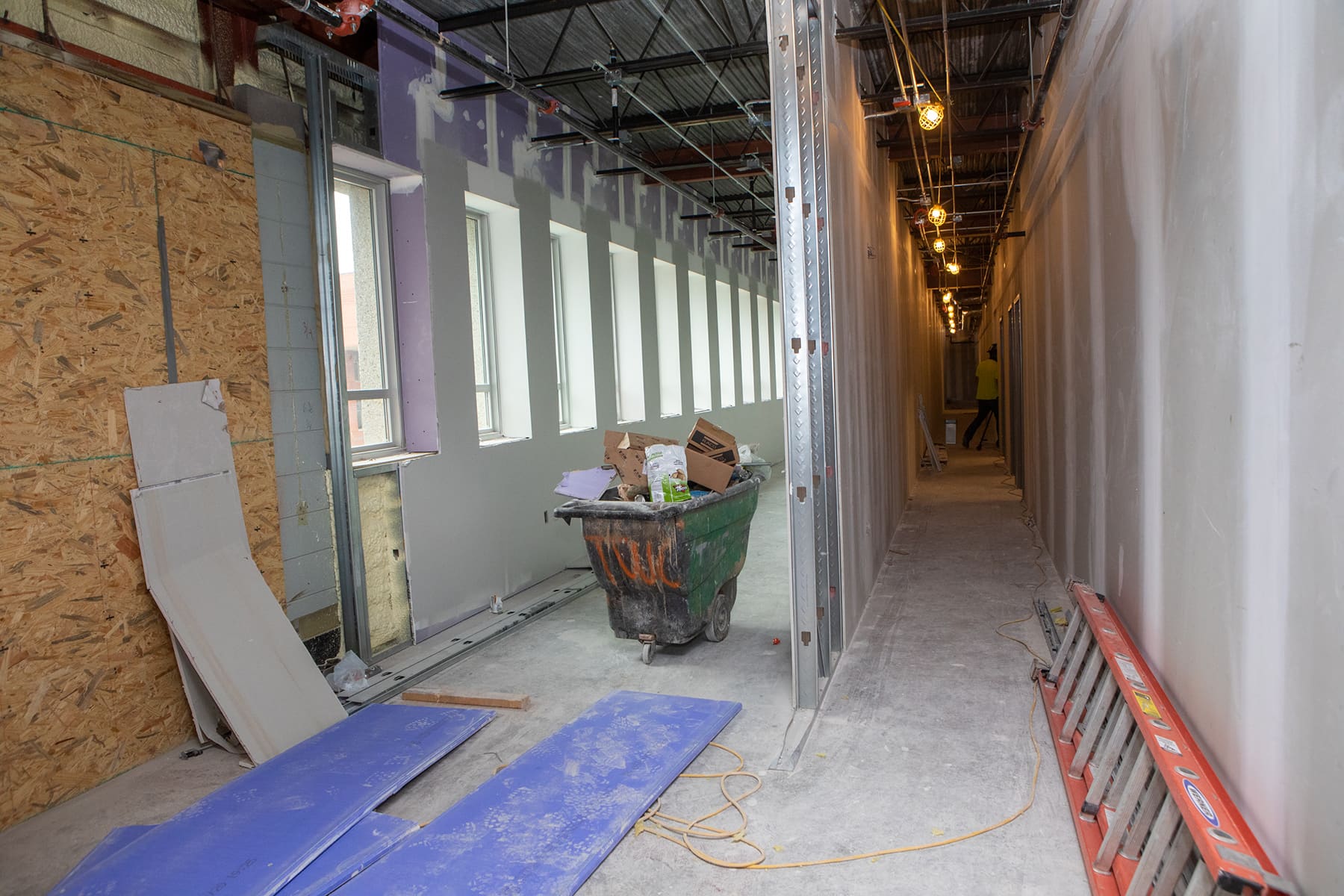 Drywall installation underway in Sanford Hall, as of June 30. The window side will be part of individual faculty office space, with each new office being larger than before the renovation. Photo by Marie Freeman 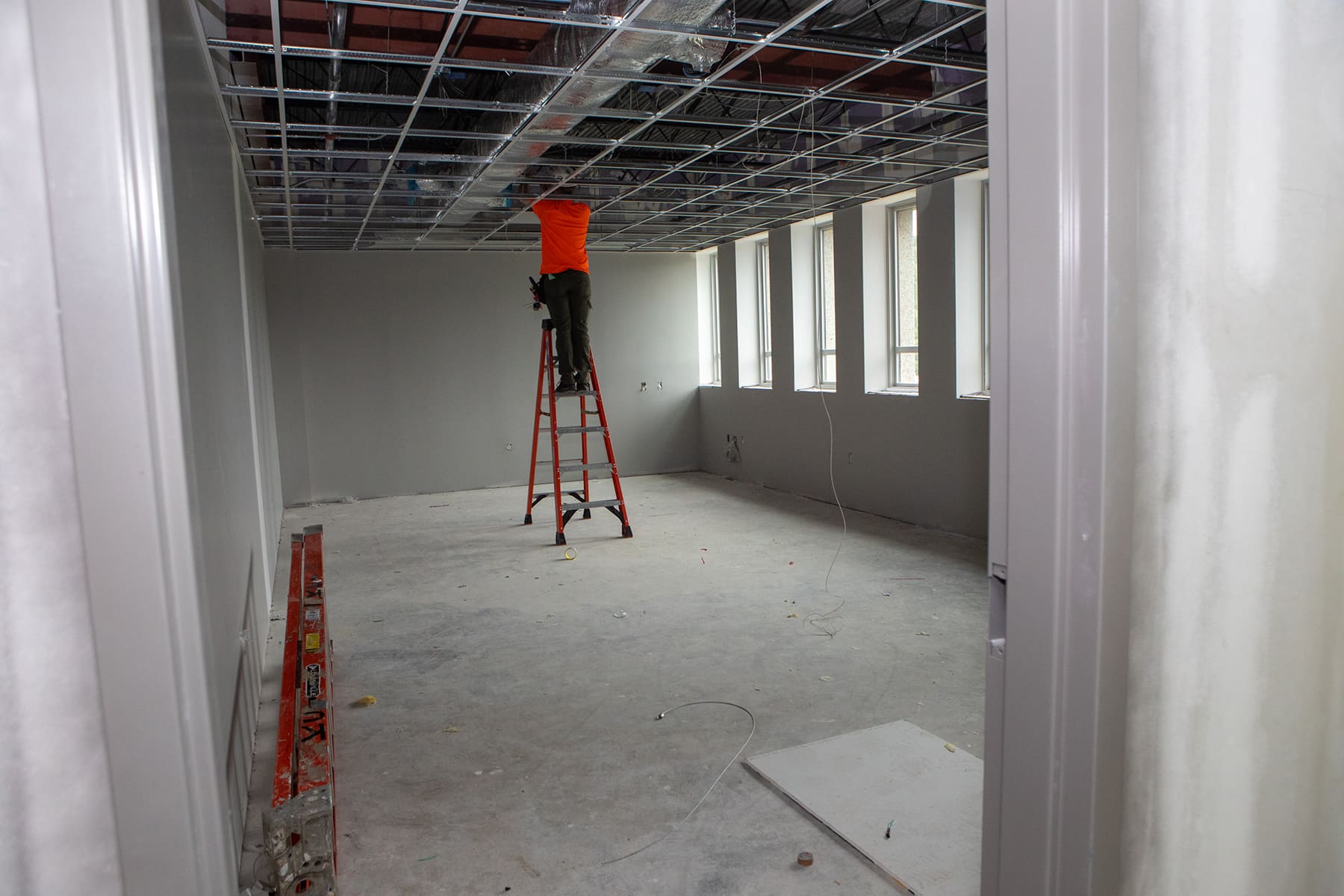 Above-ceiling installation of wiring underway in a fourth-floor classroom, as of June 30. Photo by Marie Freeman 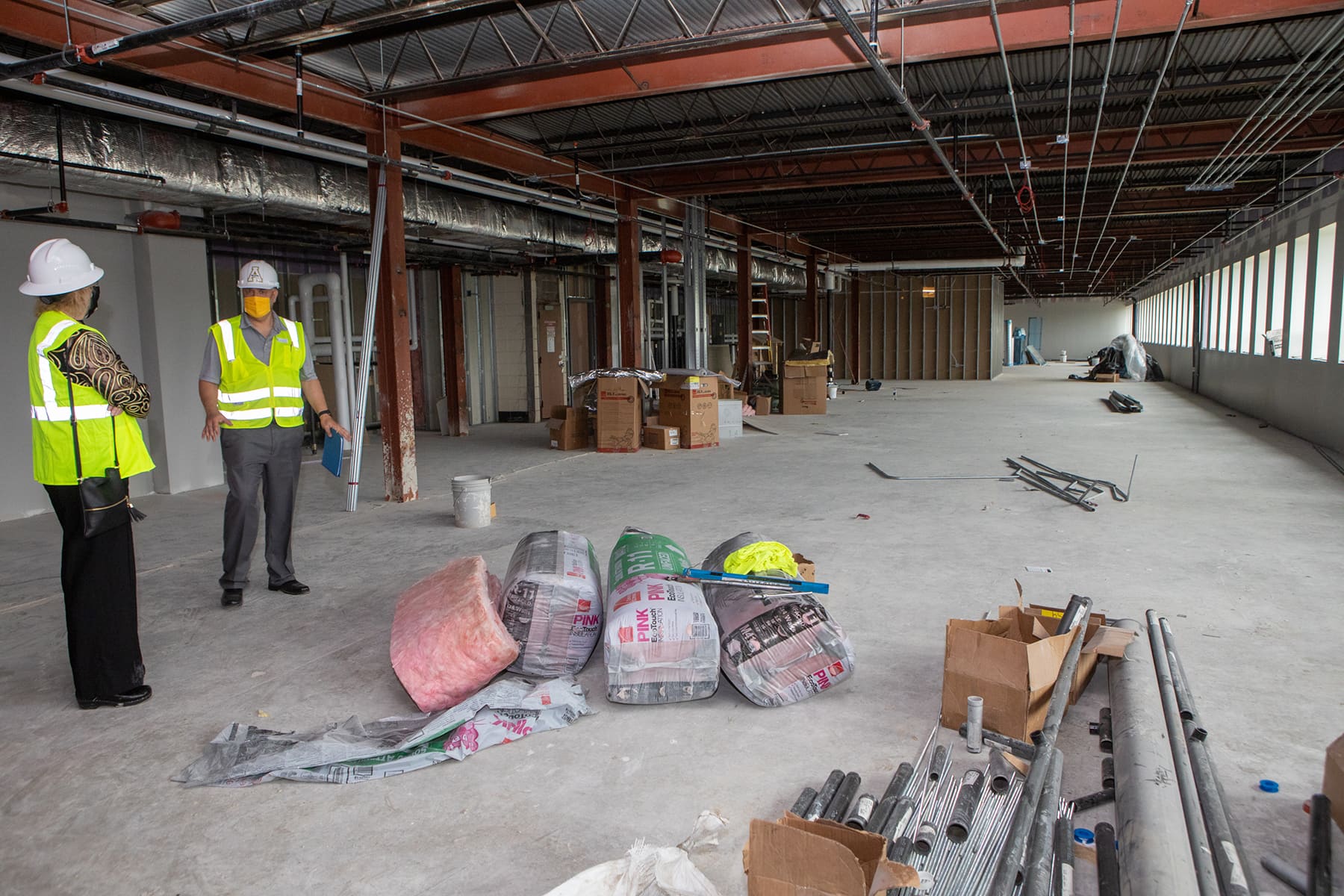 Associate Vice Chancellor for Facilities Management Nick Katers and Chancellor Sheri Everts on Sanford Hall’s fifth floor, in space to be completed in the final phase of the renovation project. Photo by Marie Freeman 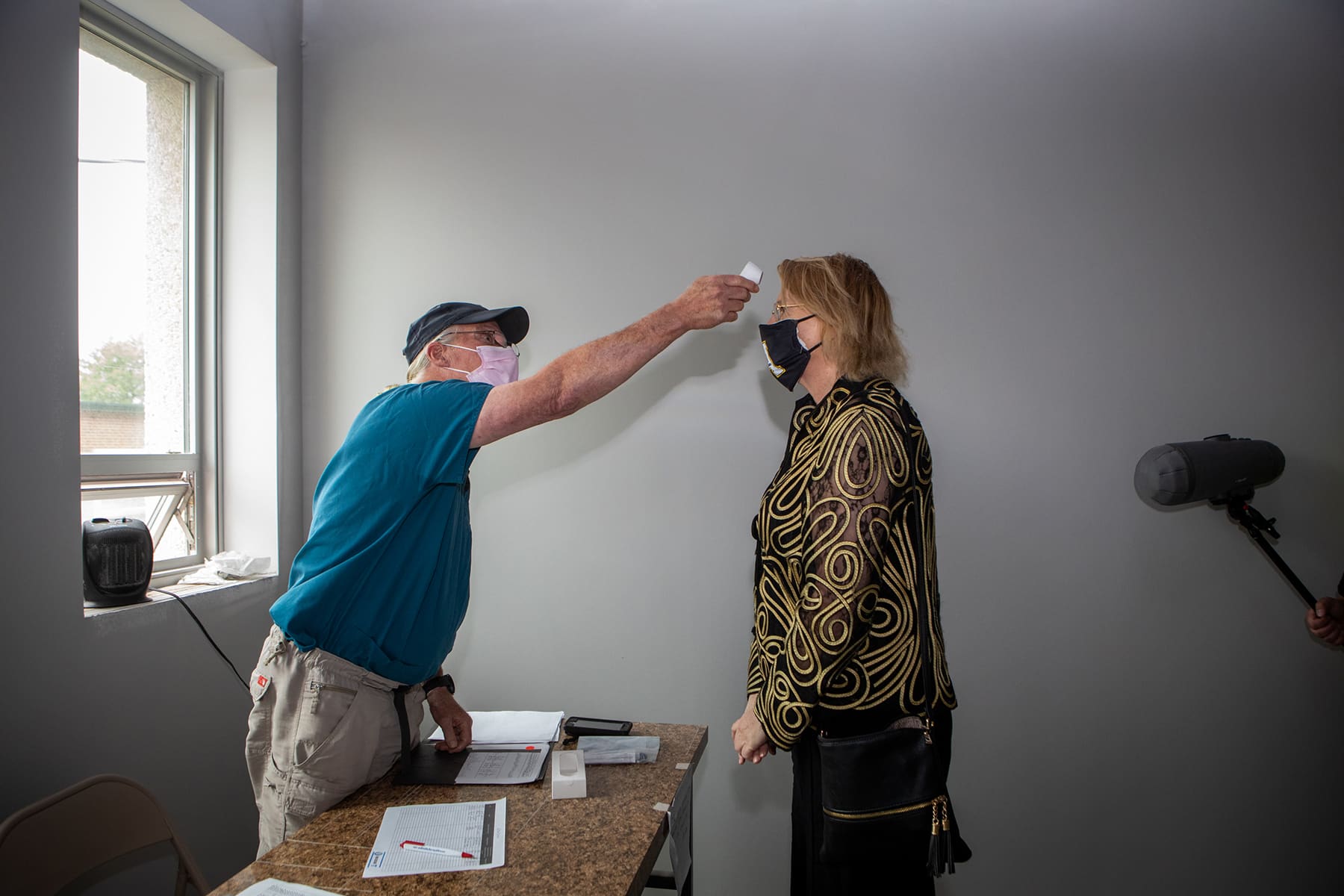 Chancellor Sheri Everts has her temperature taken by a medical officer employed by Vannoy Construction upon entering the Sanford Hall worksite June 30. This practice is among daily health and safety precautions underway at the site. Photo by Marie Freeman 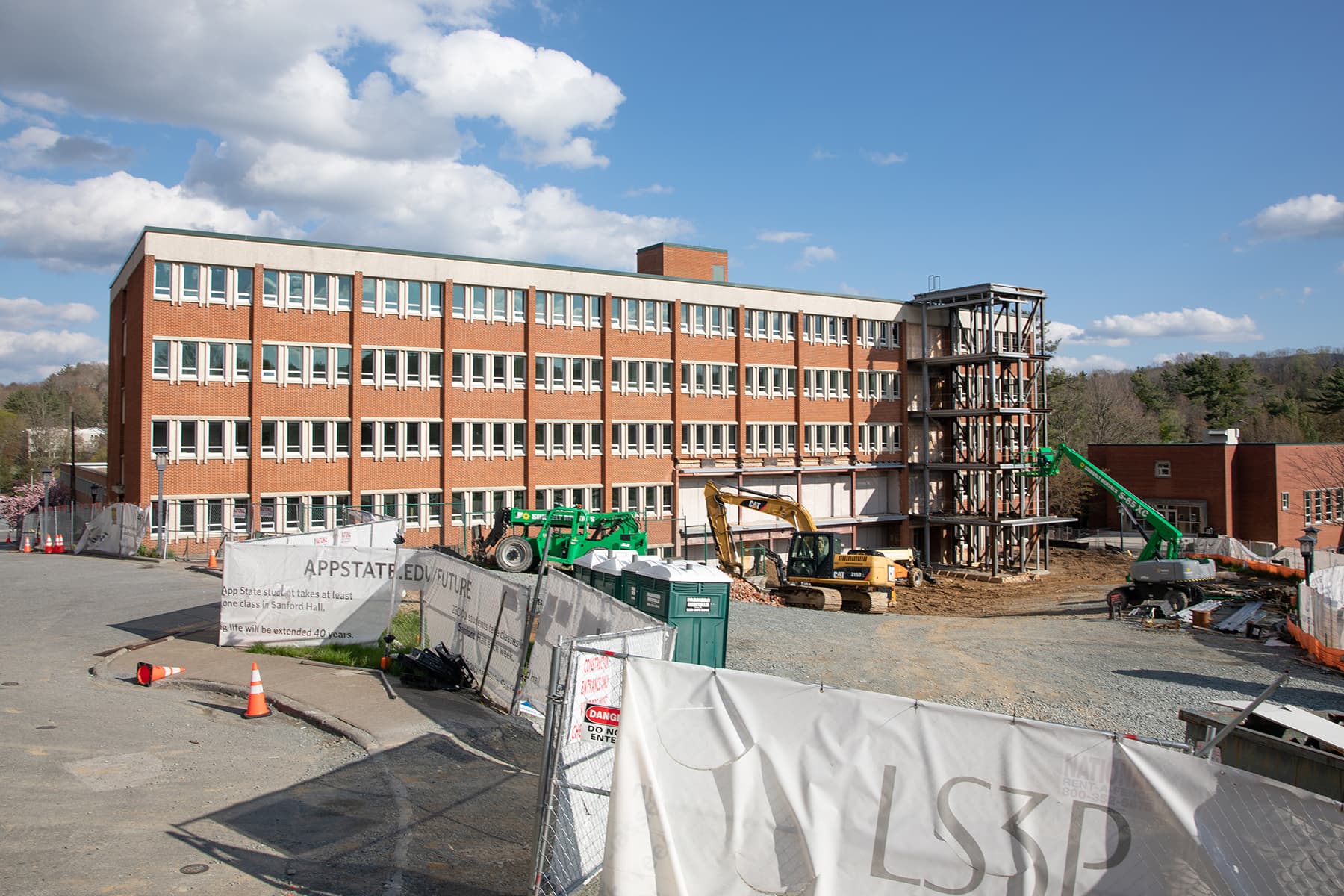 Renovation in progress at Sanford Hall, as of April 22. Photo by Chase Reynolds 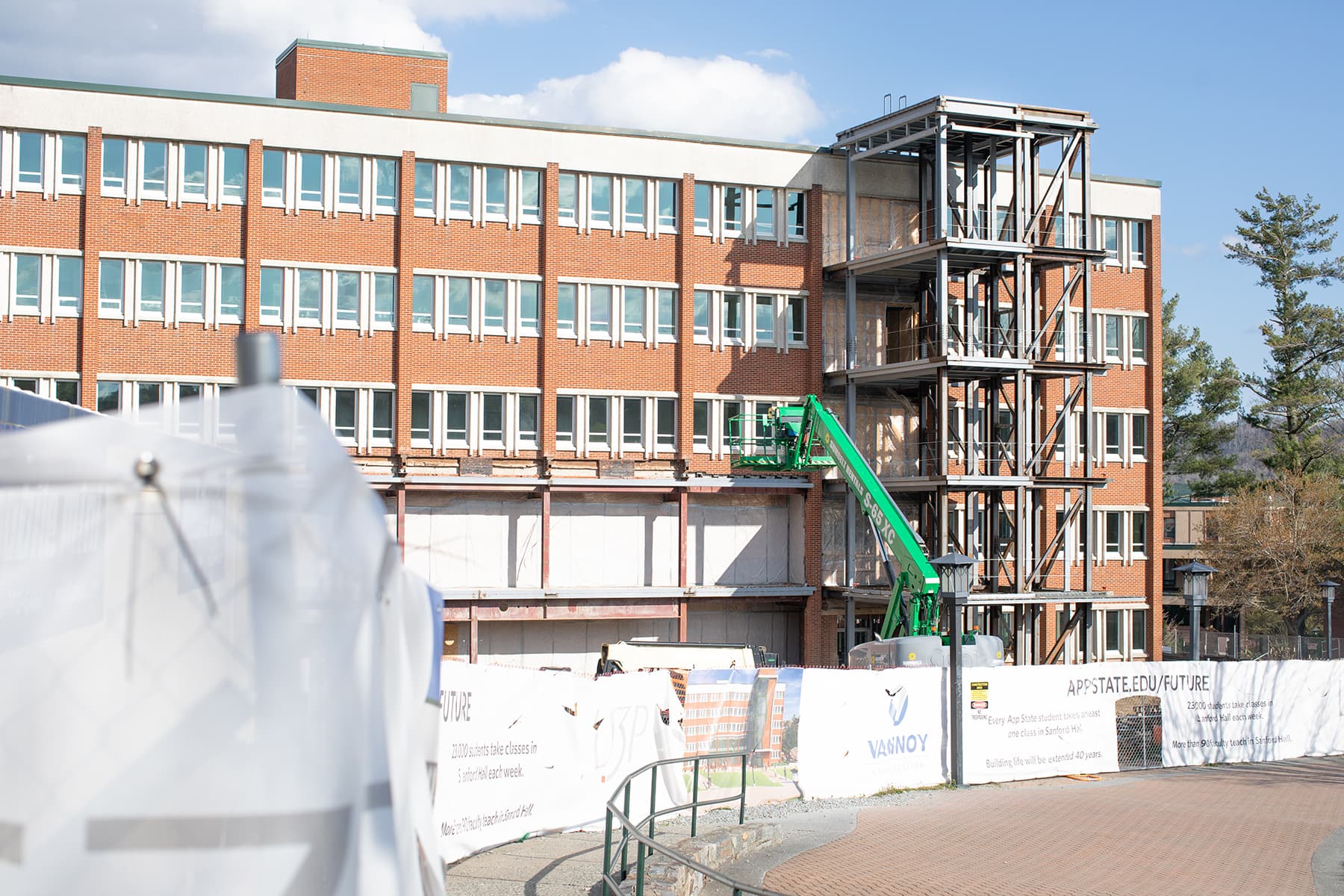 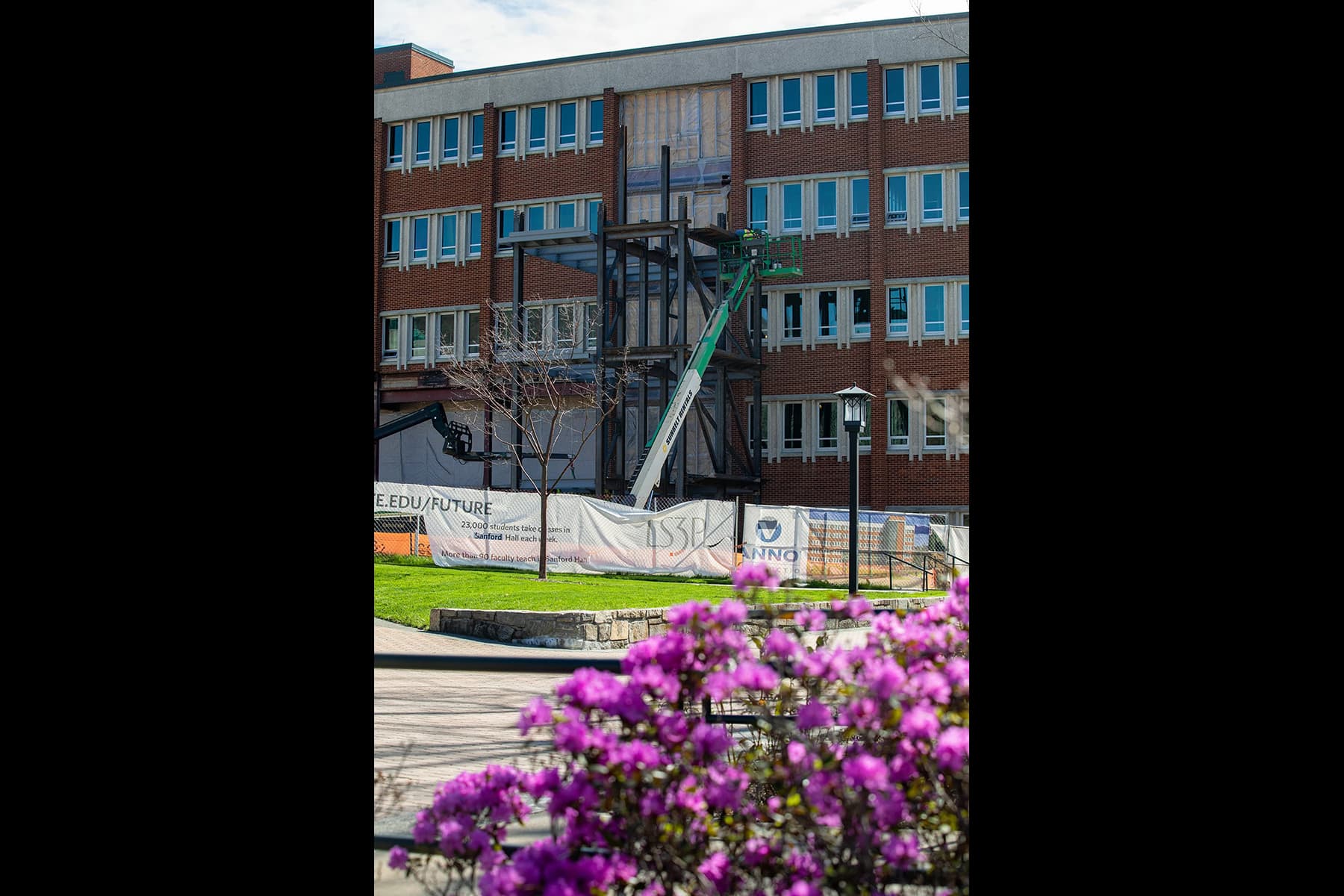 Progress on the framing for Sanford Hall's exterior elevator shafts, as of March 31. Photo by Marie Freeman 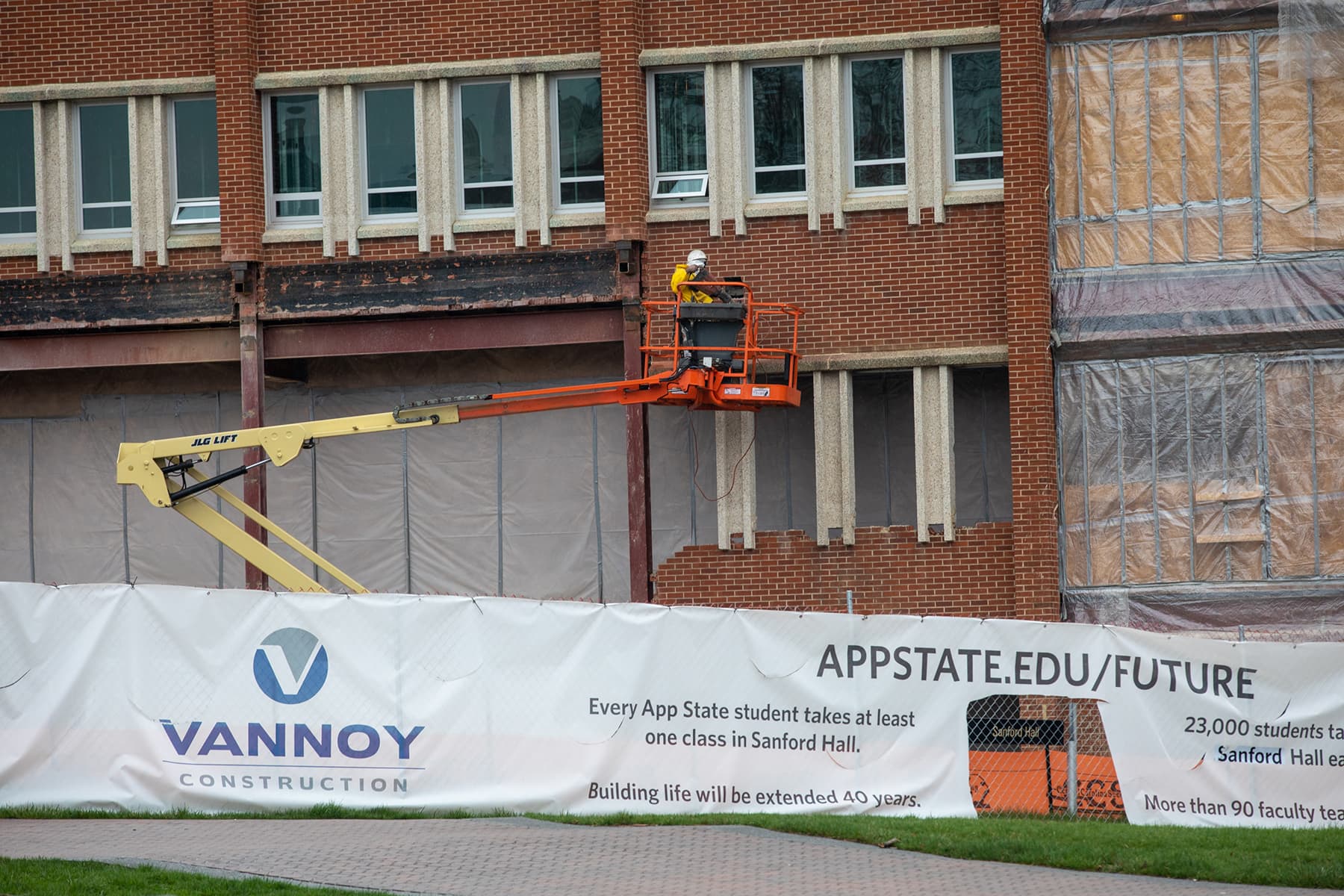 Progress on the exterior of Sanford Hall, as of March 26. Photo by Marie Freeman 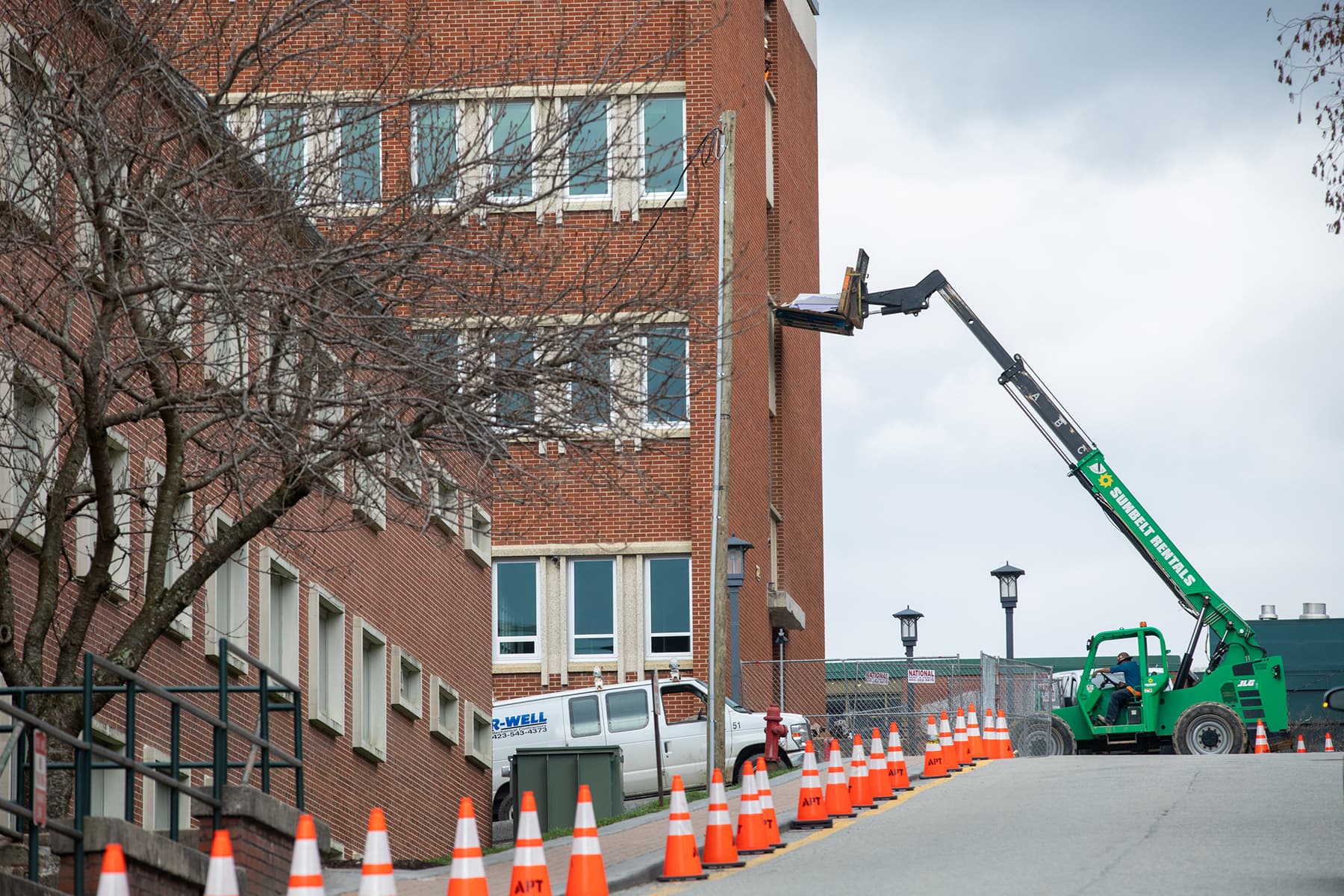 Delivery of construction materials at Sanford Hall on March 26. Photo by Marie Freeman 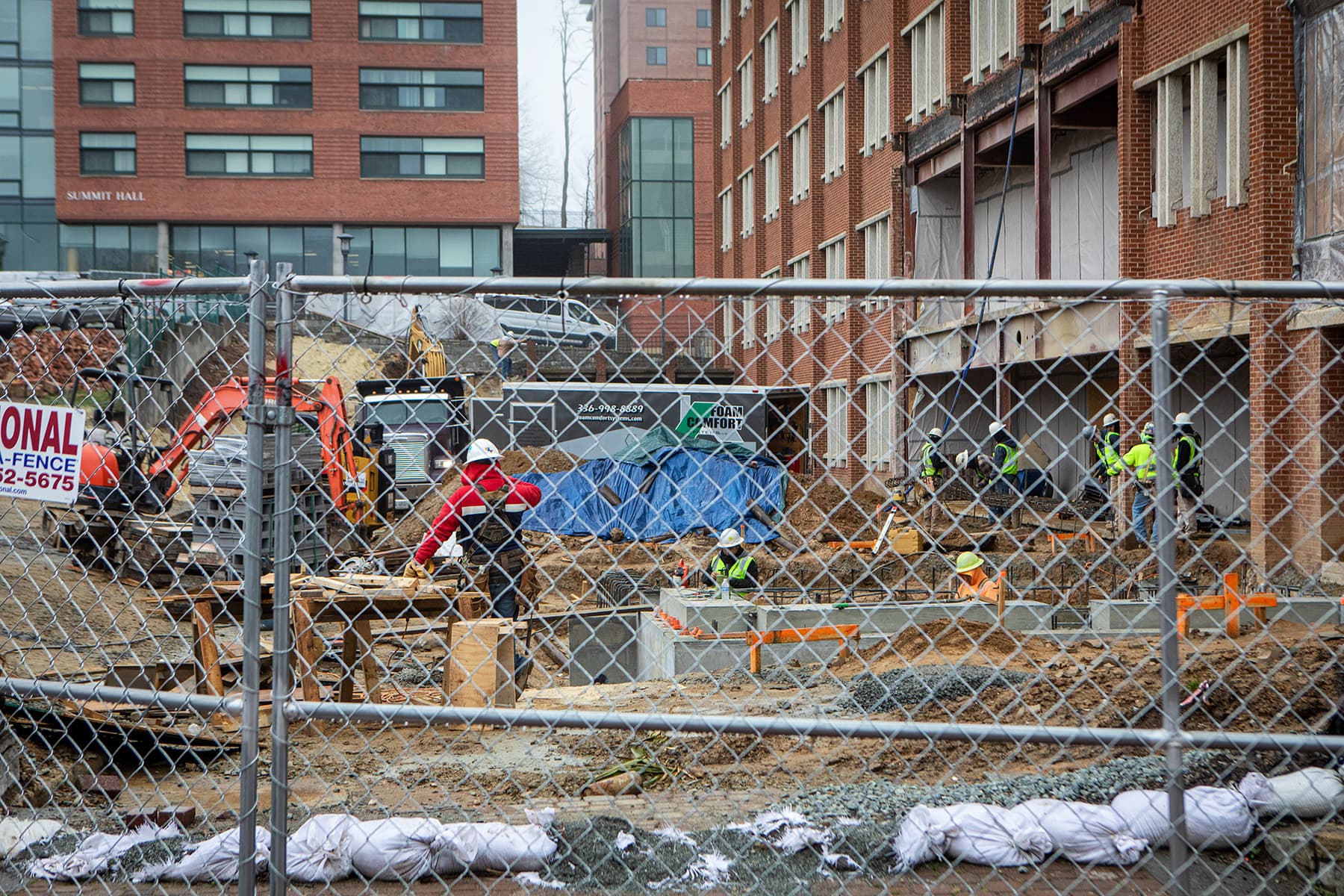 Construction underway on the footers for Sanford Hall’s two exterior elevators, as of March 17. Photo by Marie Freeman 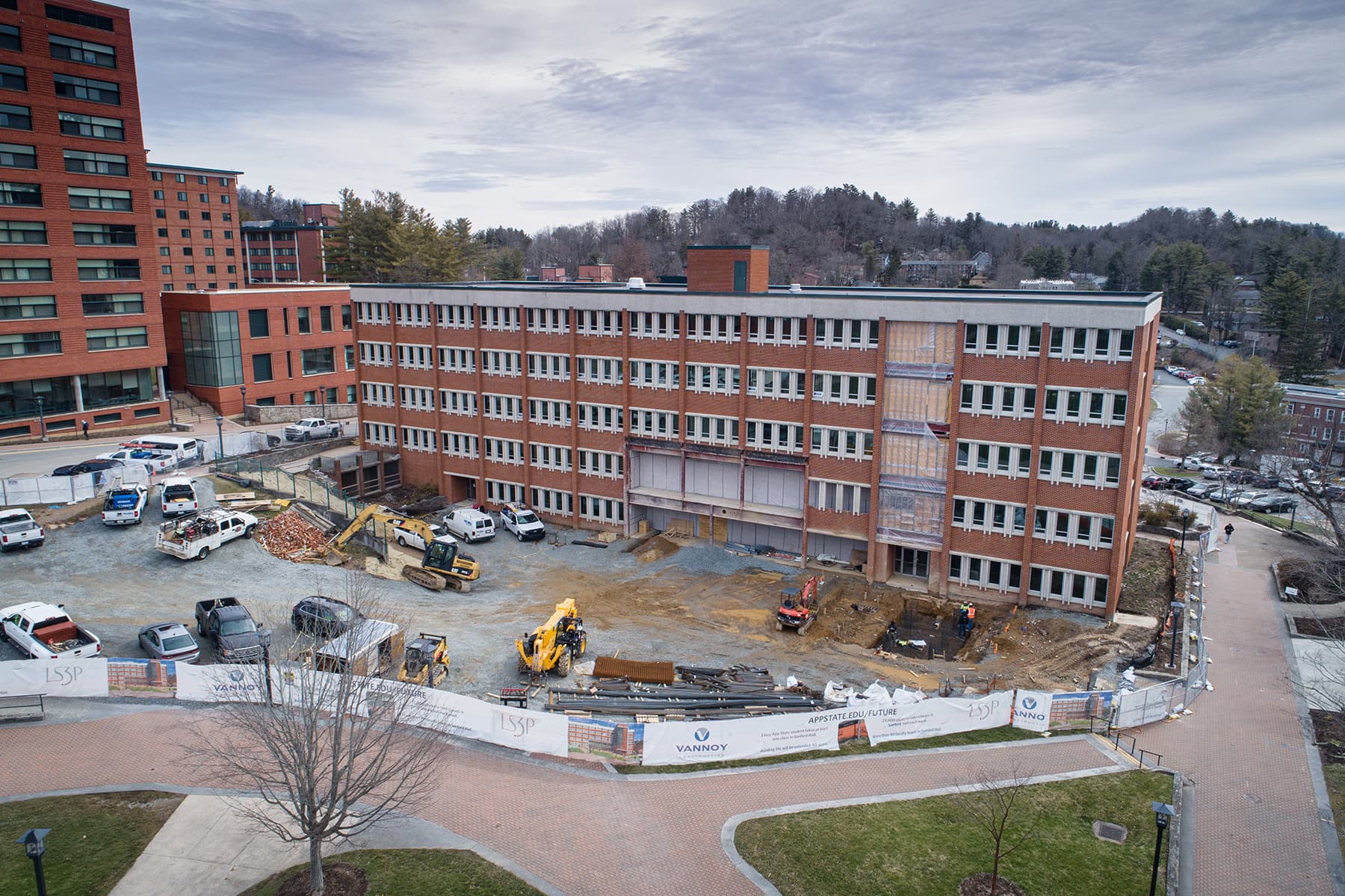 Renovation in progress at Sanford Hall, as of March 4. Photo by Marie Freeman 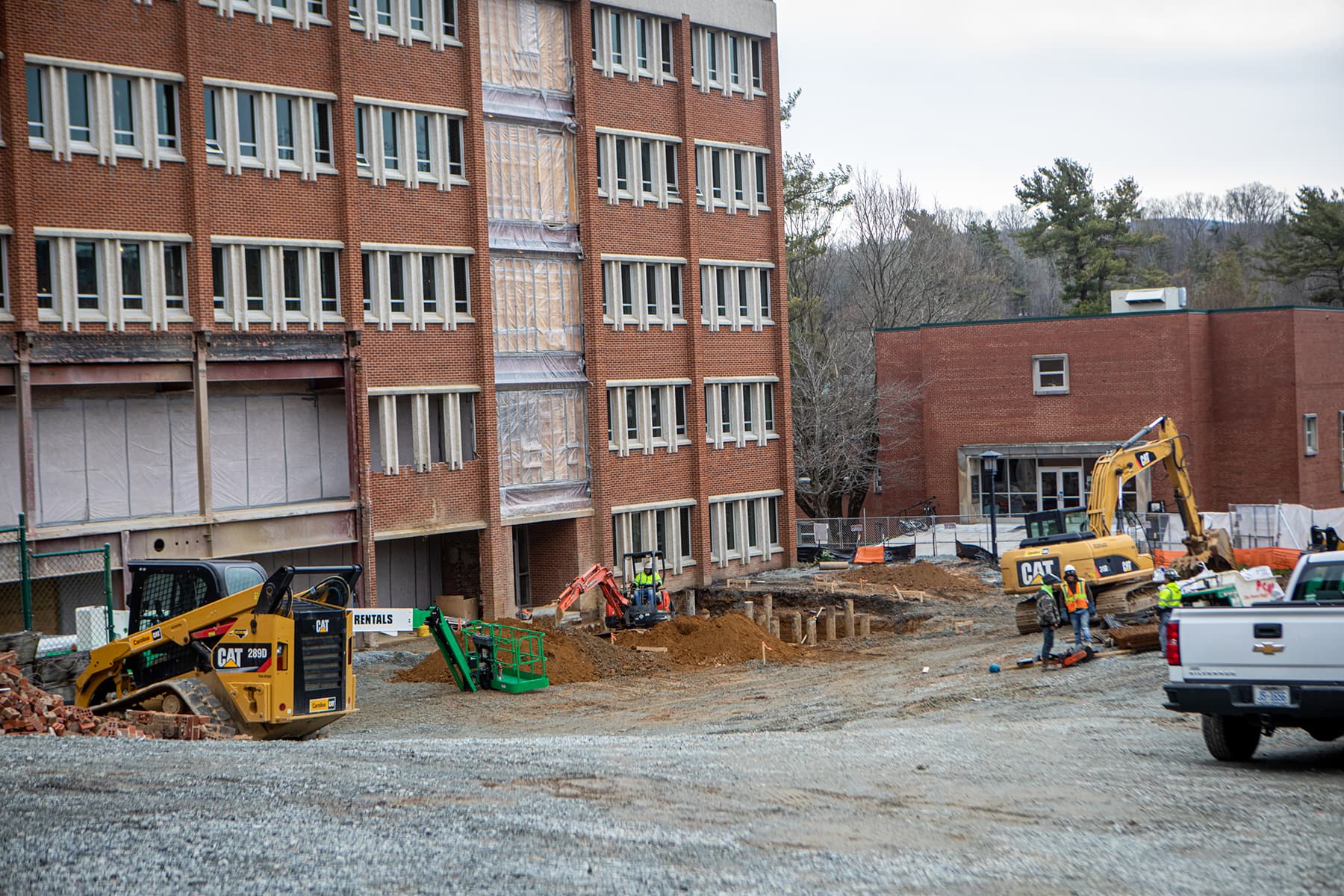 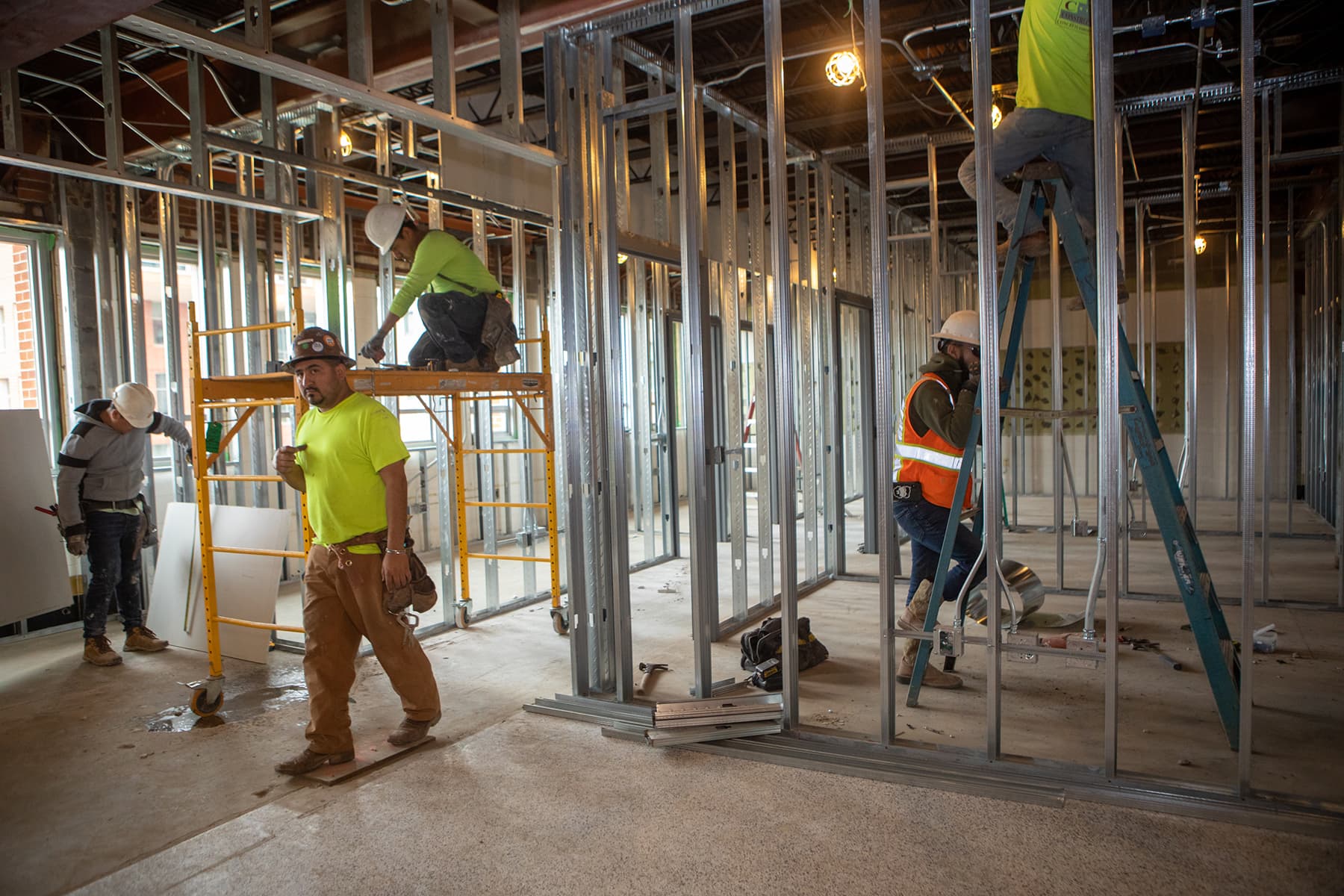 Interior framing as part of the Sanford Hall renovation, as of Feb. 19. Photo by Marie Freeman 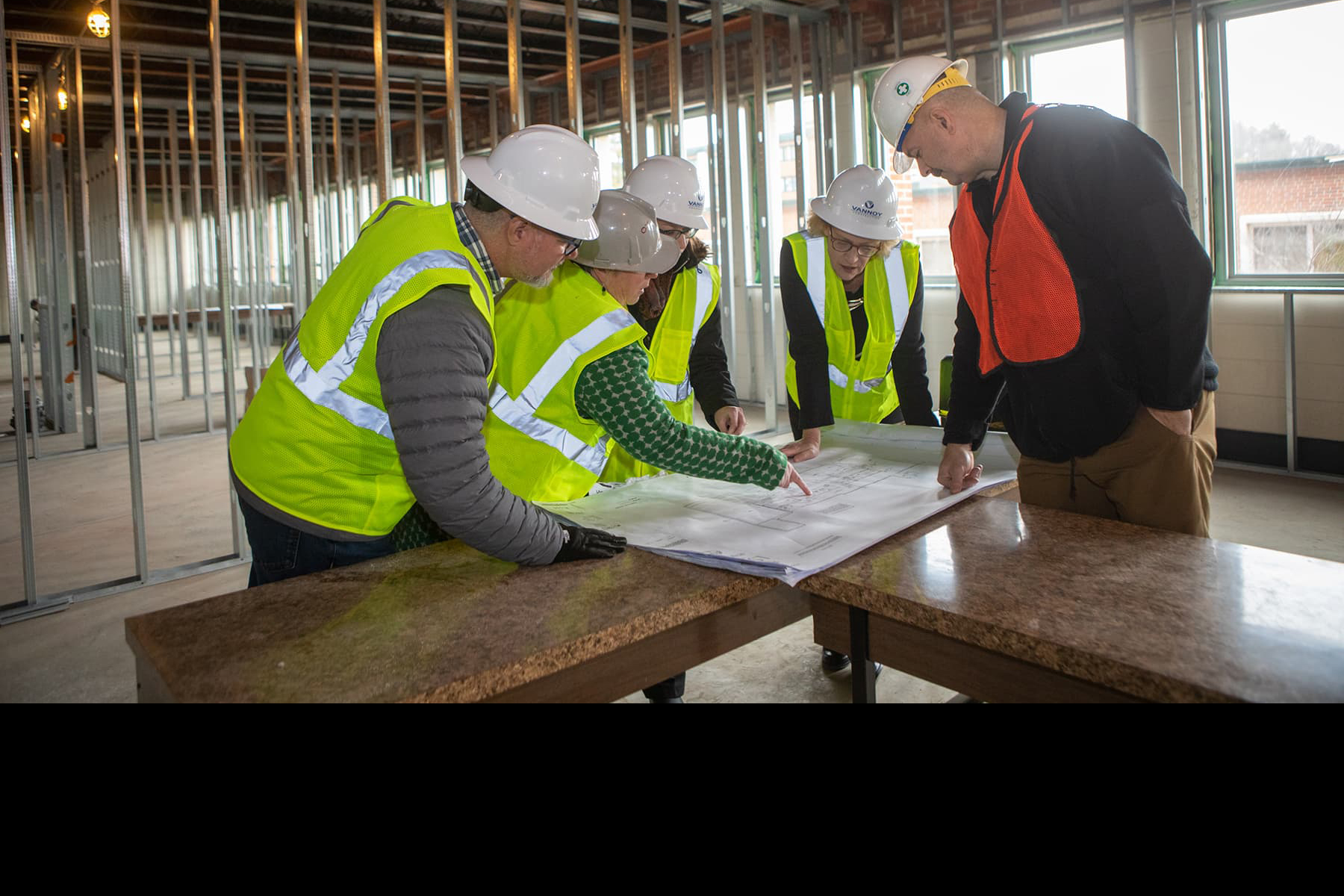 In October 2018, the UNC Board of Governors authorized $18 million for the project. LS3P Associates and Stanford White Engineering were selected for the project’s design. Work on the building began in summer 2019 and will run to spring semester 2021.

The renovation work began with the replacement of 464 windows for energy savings and continued with the interior framing of 53 faculty and adjunct offices, 25 classrooms and a computer lab, followed by electrical and plumbing work. Two elevators are also being added. This summer, work on stone veneer and masonry begins.

The planned schedule for opening is as follows: Classrooms and common areas on the first floor will open in time for spring 2021 classes. Soon after, classrooms, offices, common areas on floors two, three and four will open, as well as the elevators and three additional classrooms and bathrooms on the fifth floor. In a final phase, additional shell space on the fifth floor can be constructed into 39 offices.

Providing the best environment for teaching and learning, particularly for first-year students, can impact recruitment and retention.

Construction at App State continues because:

• Discontinuing projects would severely impact project costs to the state, requiring more money to re-start an abandoned project and increasing the risk of material delays and some subcontractors going out of business.

• The new residence halls being built under a public-private partnership constitute a ground lease, whereby a private developer has created a timeline and is managing the construction privately. The financial feasibility of the project is based on a specific timeline tied to the academic year.

• In other construction on campus, bond money was approved by Appalachian’s Board of Trustees and the Board of Governors of the University of North Carolina System. Appalachian has a fiduciary responsibility to execute construction in the shortest time possible. And, much like a homeowner building a new home with a construction loan, the university is already making payments on the project.